Photo: Elvira Kurt brings down the house in Nunavut’s capital 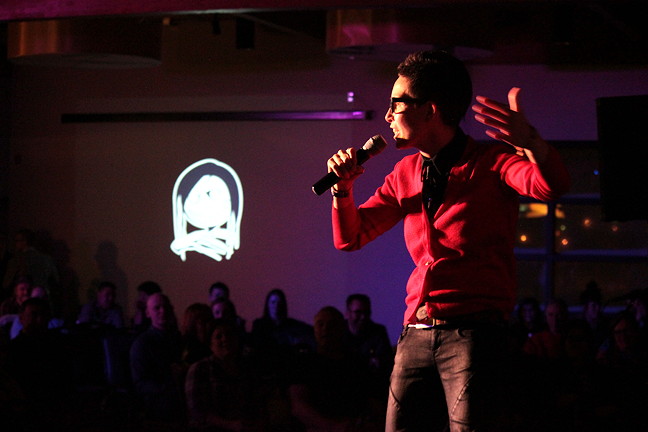 Comedian Elvira Kurt performs before a crowd of 200 or so at the Frobisher Inn’s Koojesse Room Feb. 27 during an Iqaluit Mahaha Comedy event co-hosted with Iqaluit Queer Pride. Despite blizzard conditions, and a decision by hotel management to close the bar just before the show began, the room was packed, the jokes were ripe and ribald and the laughter non-stop to tears. Kurt, a much-loved Toronto comedian, comedic writer and host of the game show Spin Off, was joined by local performers Laakkuluk Williamson Bathory, Bibi Bilodottir and Nicole Etitiq. The all-female show, save for emcee Franco Buscemi, gave the sober, storm-busting crowd their money’s worth with jokes poking fun at life in Iqaluit including a hilarious description of Kurt gnawing on maktaaq for the first time — “like eating a human baby’s knuckle.” Read more about the show later on NunatsiaqOnline.ca. (PHOTO BY LISA GREGOIRE)