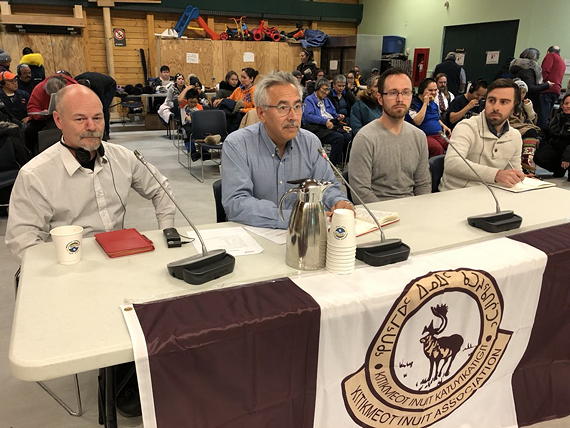 First Air’s executive chairman Johnny Adams, second from left, prepares to speak at the Kitikmeot Inuit Association’s annual general meeting in Cambridge Bay on Friday, Oct. 19. Adams spoke about his airline’s planned merger with Canadian North and to explore a partnership with the KIA, which he said would provide lower airfares for beneficiaries. For instance, a one-way ticket to Yellowknife would cost $388, instead of about $1,300. The KIA supported Adams’ offer to participate in the “Ilak” fares with a resolution passed as the meeting wrapped up late Thursday afternoon. The target date for the unrolling of the Ilak program is Jan. 1, 2019. (PHOTO BY JANE GEORGE)