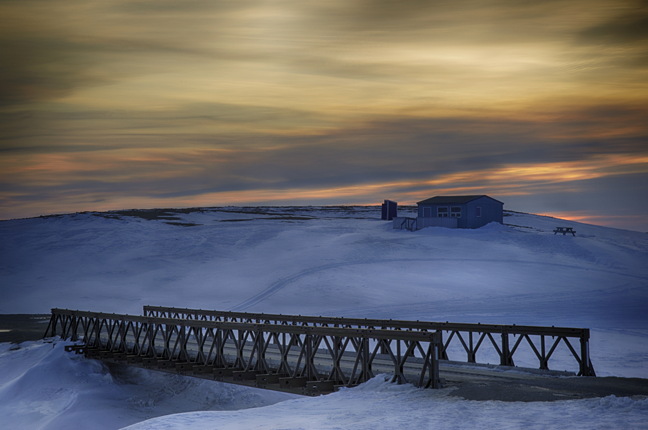 We’re nearing the summer solstice on June 20 which means many of Nunavut’s communities are now bathed in 24-hour sunlight including Cambridge Bay, above. Here’s a view of the elder’s cabin at Fresh Water Creek bridge during the first day of 24-hour daylight taken at 12:24 a.m., May 21. The sun will reach its peak at 12:58 p.m. June 2, according to websites that track these things, and later for communities further north, such as Grise Fiord, where the sun will reach its peak around 1:30. The sun still dips below the horizon in some communities further south, such as Arviat, where the sun sets around 10:40 p.m. these days and rises again around 4 a.m. Most Kivalliq communities, and some in south Baffin, are located below the Arctic Circle (66.33 degrees latitude) so they don’t experience 24-hour sunlight. Naujaat, Jack Anawak’s hometown which he likes to call the Centre of the Universe, sits almost exactly on the Arctic Circle, at 66.5 degrees latitude. (PHOTO BY DENISE LEBLEU IMAGES)