Photo: Greenpeace tries to stop icebreaker from going to Alaska 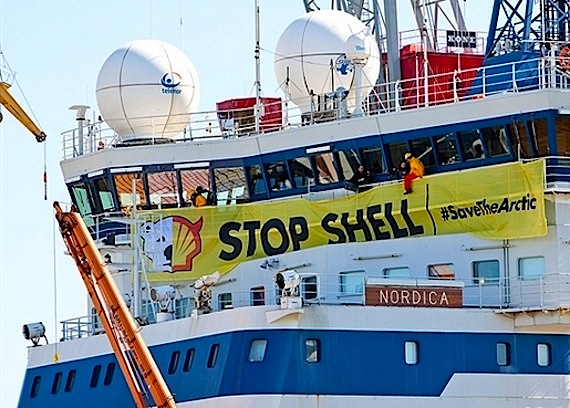 Greenpeace activists chained themselves to deck of the Nordica icebreaker in Helsinki’s harbour on May 1 to block the oil giant Shell’s plans to drill for oil and gas offshore Alaska. “We are here on behalf of the nearly 400,000 people around the world who in just a couple of months have spoken out demanding that Shell cancel its reckless campaign of Arctic destruction,” said Greenpeace campaign manager in Finland Tapio Laakso. “Oil companies know full well that an oil spill off the Alaskan coast would devastate the environment and prove impossible to clean up.” Late Tuesday evening Finnish police detained nearly 40 people involved in the Greenpeace action, and the Nordica left the harbour. (PHOTO BY MATTI SNELLMAN/ GREENPEACE)