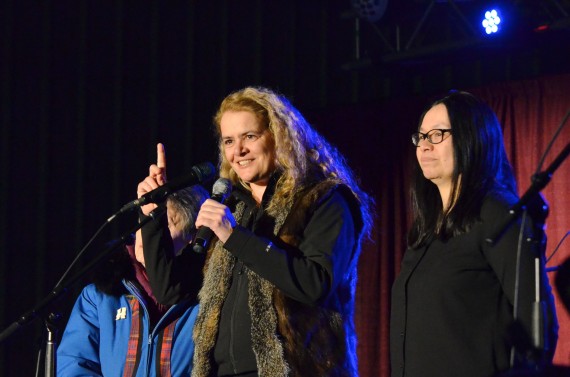 Governor General Julie Payette is welcomed as the “honorary Tuniq” during the opening ceremonies for the 53rd annual Toonik Tyme Festival in Iqaluit on Thursday, April 12. She is seen here on stage with Iqaluit Mayor Madeleine Redfern at the city’s downtown curling rink. While Payette is the honorary Tuniq, the Toonik Tyme Tuniq is Aapa Geetah, but he was unable to attend the ceremonies because of a medical issue. He is the grandson of the first Toonik Tyme Tuniq from 1965. The opening night of this year’s Iqaluit springtime festival featured music from the Inuksuk Drum Dancers and the popular Inuktut band Uvagut. Toonik Tyme events run until April 22. To see the official schedule, visit tooniktyme.ca. (PHOTO BY STEVE DUCHARME)