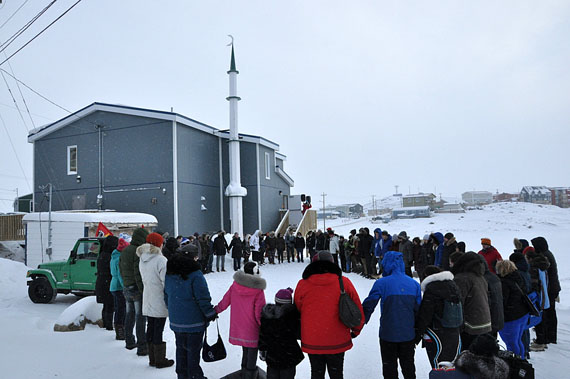 More than 80 Iqaluit residents formed a circle near the Iqaluit mosque at noon Jan. 30 to show their solidarity with Nunavut’s Muslims, in the wake of yesterday’s deadly shooting at a mosque in Ste-Foy, Quebec that killed six people and injured another 19. The event was organized by the Islamic Society of Nunavut and the Qanak group. “In the wake of the cowardly terrorist attack on Muslims at the #SainteFoy mosque we are calling on the community of Iqaluit to show love and support for fellow Nunavummiut,” organizers said. Muhammad Wani, president of the Islamic Society of Nunavut, spoke at the event. (PHOTO BY THOMAS ROHNER)