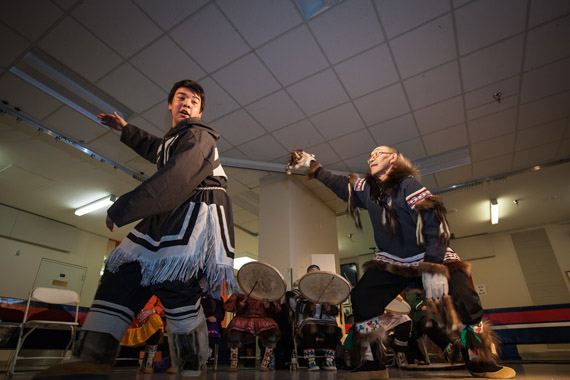 Jamie Takkiruq, Jerry Puglik and the Kitikmeot drummers drum dance for delegates of the Inuugatta Language Conference, which wrapped up in Iqaluit Feb. 27. The conference was hosted in part by Nunavut’s Languages Commissioner Sandra Inutiq and the territory’s minister of languages George Kuksuk, in collaboration with Nunavut Tunngavik Incorporated and the Inuit Uqausinginnik Taiguusiliuqtiit. Inuugatta brought together over 70 participants from around Nunavut, other areas of the circumpolar world, and Canada. The GN will produce a report from the conference with points on how to further revitalize and strengthen the use of Inuktut. (PHOTO COURTESY OF THE GN)