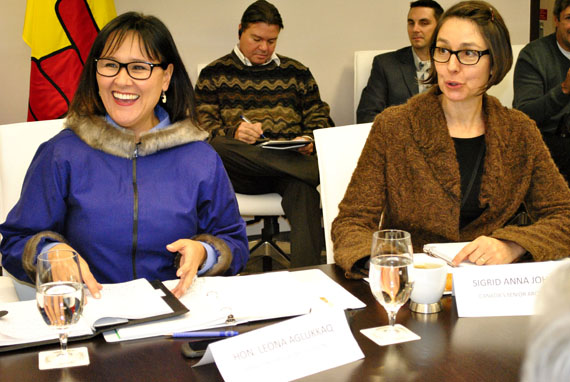 Nunavut MP Leona Aglukkaq, who will serve as Canada’s chair of the Arctic Council for two years after May 2013, with Sigrid Anna Johnson, the Department of Foreign Affairs’ senior Arctic official for Arctic Council matters, at a consultation meeting in Iqaluit Oct. 27. Aglukkaq spent most of the day meeting with Nunavut MLAs, Nunavut cabinet ministers, representatives from Inuit organizations, and representatives from the private sector and the municipality of Iqaluit. This work is part of a pan-northern consultation tour held in advance of Canada assuming the Arctic Council chairmanship in May 2013. Next week, Aglukkaq will meet northern leaders in Whitehorse and Yellowknife. “Going through this process, the general theme is to focus on development for the people of the North, to put the focus back on people and basically to sit there and listen to ideas,” Aglukkaq said. Read more later on NunatsiaqOnline.ca. (PHOTO BY JIM BELL)