Photo: Look at me! I’m in the Stanley Cup! 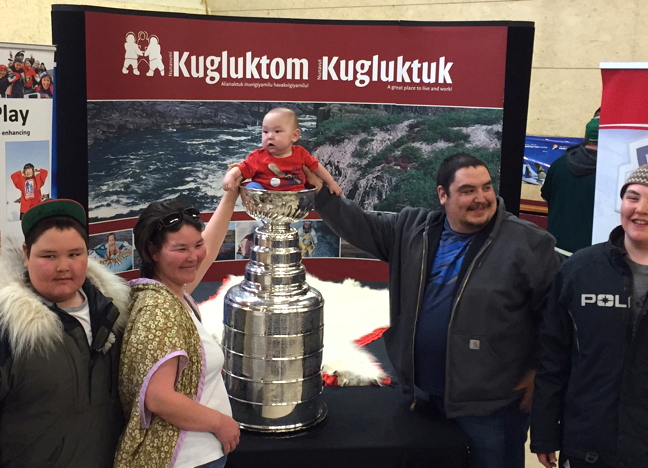 Kugluktuk Mayor Ryan Nivingalok and his wife Amy put their future Jordin Tootoo into the Stanley Cup April 28 during a Project North sponsored tour this spring in Nunavut. Famed NHL alumni Lanny McDonald and Mark Napier are joining the cup on its northern tour, shaking hands and signing autographs. Project North, with help from partners ScotiaBank, Canadian Tire, First Air and Adventure Canada, is bringing the cup to seven Nunavut communities this spring and, in Kugluktuk and Igloolik, they are donating 25 sets of new hockey equipment for kids. Project North, which launched seven years ago, has to date donated more than $700,000 worth of hockey equipment to 22 communities in Nunavut and two communities in Labrador. The cup is expected in Arctic Bay and Pond Inlet today and then it’s on to Igloolik, Cambridge Bay and Yellowknife on Saturday, May 1. See more photos on our Facebook page. (PHOTOS COURTESY ADVENTURE CANADA)