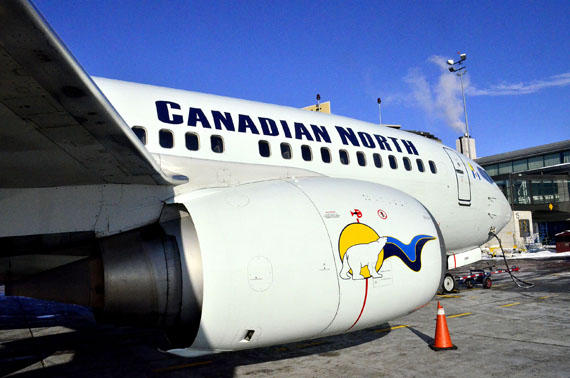 Here’s Canadian North’s new 737-300 aircraft parked in front of gate 15 at the Ottawa airport early on the morning of Jan. 2, prior to its inaugural flight to Iqaluit, which took off at 1:13 p.m. and landed in Iqaluit at 3:56 p.m. The airline has converted the jet into a combi aircraft capable of operating in three configurations: the one they’re most likely to use in the Baffin region is 80 passenger seats plus three air cargo pallets. The plane, which has now entered regular service on the Iqaluit-Ottawa route, is also capable of a 120-seat full passenger configuration and a full freighter configuration. “We’re here to stay in the Baffin region,” Lorraine Bonner, Canadian North’s vice president of scheduled services, told Nunatsiaq News during a visit to the plane. Read more later on nunatsiaqonline.ca. (PHOTO BY JIM BELL)