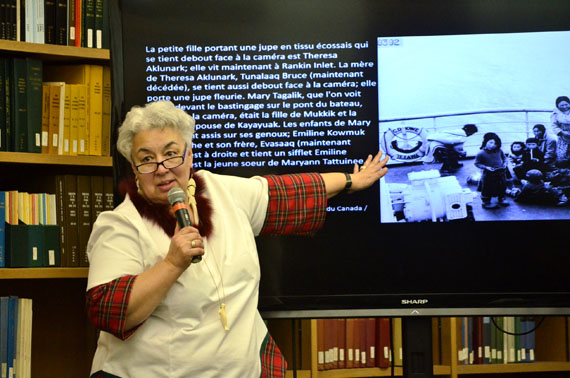 Manitok Thompson, at an event held March 1 at Library and Archives Canada in Ottawa, talks about the family relationships between her and a group of Inuit whose images appear in a photograph taken by Wilfrid Doucette of the National Film Board on the deck of the C.D. Howe off Coral Harbour in July of 1951. This archival photo is one of many thousands, dating from the early years of the 20th century to the 1970s. Under a project called Project Naming, started in 2002 by Morley Hanson and Murray Angus of Nunavut Sivuniksavut, Inuit students at NS, and others, have identified more than 2,000 Inuit, along with places and activities, represented in the federal agency’s archives. This week, Library and Archives Canada celebrated the 15th anniversary of the project with three days of activities. Read Nunatsiaqonline.ca later for more on Project Naming. (PHOTO BY JIM BELL)