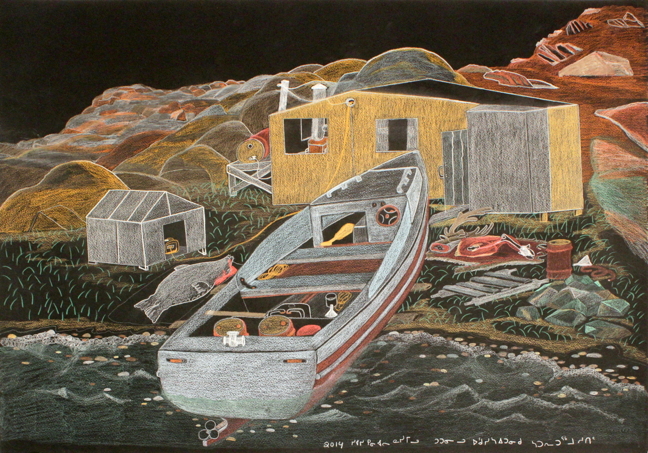 “My Dad Going Caribou Hunting” is one of many drawings by Cape Dorset’s Siassie Kenneally included in the “All the Things That I Have Seen” exhibit on now and until July 8 at Feheley Fine Arts on George Street in Toronto. Kenneally, cousin to Shuvinai Ashoona and the late Annie Pootoogook, comes from a long line of artists and often depicts her subject matter from above, as a bird might see it. But Kenneally isn’t the only Inuit artist on exhibit in southern galleries. Photographer Barry Pottle’s “The Awareness Series” just opened at the Art Gallery of Hamilton and runs until Jan. 14, 2018. Pottle’s collection of photographs depicts Inuit and their Eskimo Identification Tags, a controversial ID system implemented by the federal government from the 1940s to the 1970s. The Art Gallery of Hamilton just acquired 19 of Pottle’s photographs for its permanent collection. (PHOTO COURTESY FEHELEY FINE ARTS)