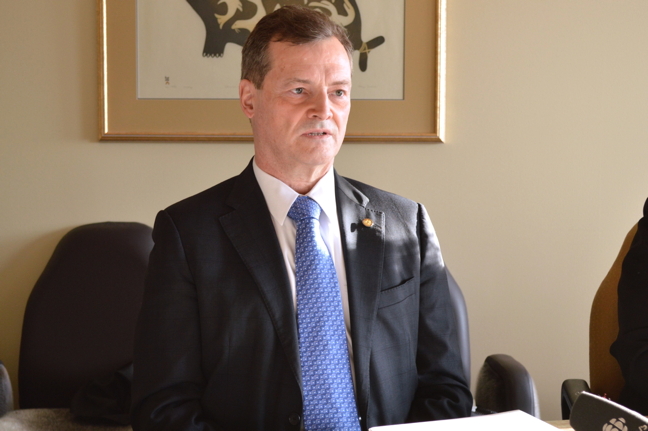 Nunavut Finance Minister Keith Peterson speaks with reporters in a budget lock-up prior to his budget speech in the Nunavut Legislative Assembly Feb. 25. Nunavut’s operating budget for the 2016/2017 fiscal year contains a $3.9 million dollar deficit and marks the first time in four years Nunavut won’t be operating with a surplus. That’s due in part to an $8-million funding shortfall from the federal government in transfer payments to the territory. But the finance department is optimistic that as more money is delivered to Nunavut from Ottawa over the course of the year — in earmarked areas of housing and power plant remediation — that the deficit will change to a small surplus. Look for full coverage of Nunavut’s 2016/2017 budget later, on NunatsiaqOnline.ca. (PHOTO BY STEVE DUCHARME)