Photo: So long Maud, good to know you 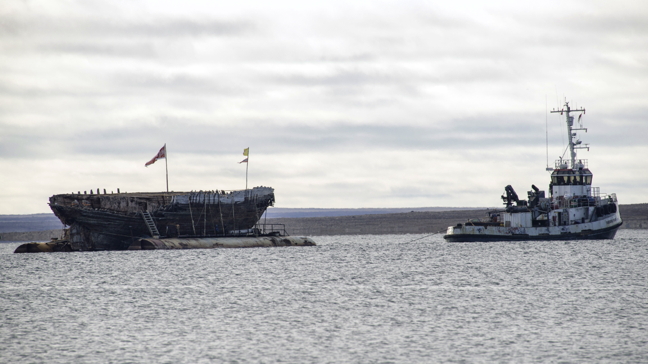 So long Maud… Norwegian explorer Roald Amundsen’s sunken Maud, known locally for years as the Baymaud, starts its long journey from Cambridge Bay back to Norway at about 9 a.m. Aug. 29, on top of a barge and towed by the Tandberg Polar tug boat. The Maud, which sank from its moorings 86 years ago, was eventually raised with huge inflatables, left in dry dock over winter so the wood could dry out, and is now bound for Greenland where the Maud Returns Home team hopes to let the ship overwinter one more time before taking the Maud across the Atlantic Ocean to Vollen, Norway, where it was built. The Maud was built for Amundsen’s second expedition to the Arctic 100 years ago but the trip through the Northwest Passage took six years and Maud ended up in Nome, Alaska, where it was sold to the Hudson’s Bay Co. (PHOTO BY DENISE LEBLEU IMAGES)