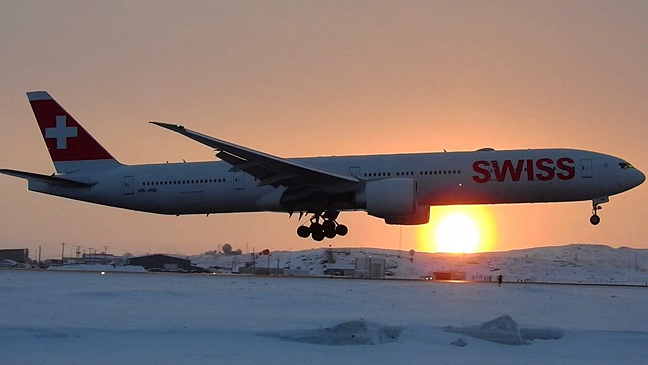 Swiss International Airlines Flight 40, a Boeing 777-300, which departed Zurich at 1:10 p.m. local time in Switzerland, bound for Los Angeles, California, makes an emergency landing in Iqaluit this afternoon, Feb. 1, with only one engine. The airline’s website first said only that Flight 40 had been “redirected.” Swiss International Air Lines ‏then said in a tweet that “LX 40 showed a technical irregularity, diverted to Iqaluit where it securely landed.” The Iqaluit airport reopened to other traffic at about 5 p.m., after the aircraft was towed off the runway. An aircraft, which left New York City at 9 p.m.to pick up the stranded passengers, departed Iqaluit at about 5 a.m. Feb. 2. Swiss International Air Lines, or “SWISS,” is the company that inherited the former Swissair, which became defunct in 2002. Read more today on Nunatsiaqonlne.ca. (PHOTO BY DARREN BROOKS)