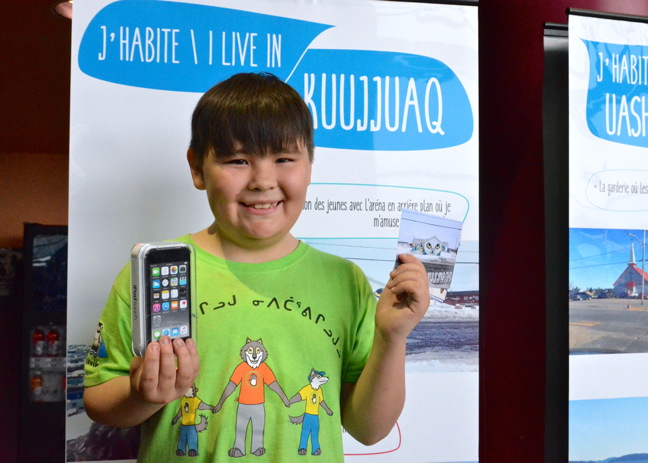 Axel Gordon holds up a postcard made from a photograph he took, and the iPod he won, as part of the J’habite ici/I Live Here photo contest run by Habiter le nord Quebecois/Living in Northern Quebec, a Université Laval research group that studies culturally appropriate design and sustainable development of Nitassinan Innu and Nunavik Inuit communities. The group is holding an Indigenous Northern Housing meeting in Kuujjuaq this week and announced photo contest winners June 7. The contest, open to Grade 5 and 6 students from Innu and Inuit communities including Kuujjuaq and Inukjuak, asked participants to submit photographs that fit the theme “I live here.” Prizes, as chosen by a jury, were given out for each community that participated and Ahoyak Koneak was the winner from Kuujjuaq. Then the public voted on an overall prize among all photos submitted and they chose Gordon. (PHOTO BY ISABELLE DUBOIS)