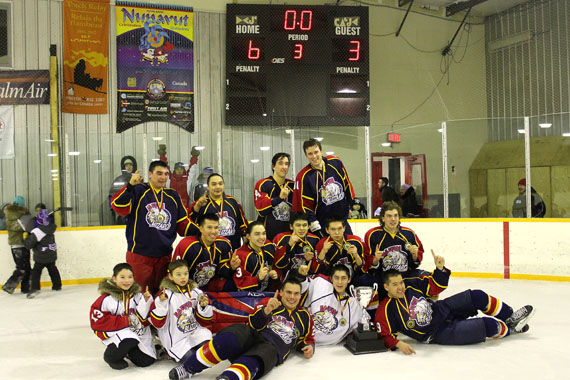 Members of Team Iqaluit pose with their gold medals March 2 after winning the 2014 Avataq Tournament in Rankin Inlet. The 13-member team went undefeated in all of their six games during the weekend tournament, eventually beating Repulse Bay 6-3 in the final. Iqaluit took a 4-1 lead in the first period, and kept Naujat back by a margin of at least two goals for the rest of the game. Iqaluit’s Sateanna Goupil netted two goals and assisted on two others, earning first star of the game honours. Repulse Bay’s Jamie Malliki earned second star for scoring twice. (PHOTO COURTESY OF NOEL KALUDJAK)