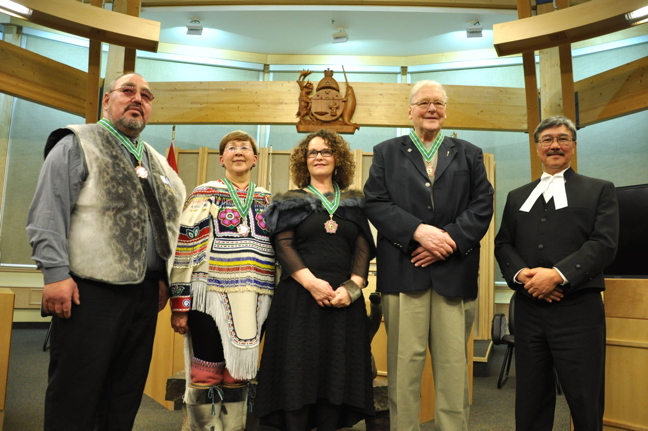 Nunavut bestows its highest honour on three Nunavummiut Feb 28 at the legislature, inducting them into the Order of Nunavut. The honours went to Gjoa Haven’s Louie Kamookak, far left, an oral historian whose research led to the discovery of one of Sir John Franklin’s lost ships, the HMS Erebus, in 2014; Ellen Hamilton, middle, an Iqaluit-based artist, film director and producer and founding member of the Qaggiavuut Society; and lastly, to Red Pederson, second from right, a long-time entrepreneur, former mayor of Kugluktuk and who represented the region as a Northwest Territories MLA from 1983 to 1991, prior to Nunavut’s creation. After the ceremony, they were joined in this photo by Nunavut Commissioner Nellie Kusugak, second from left, and Speaker of the House George Qulaut. The Order of Nunavut was created in 2010 to honour an individual’s “outstanding contribution to the cultural, social or economic well-being of Nunavut.” You can find a list of past winners at http://www.assembly.nu.ca/order-nunavut. (PHOTO BY THOMAS ROHNER)