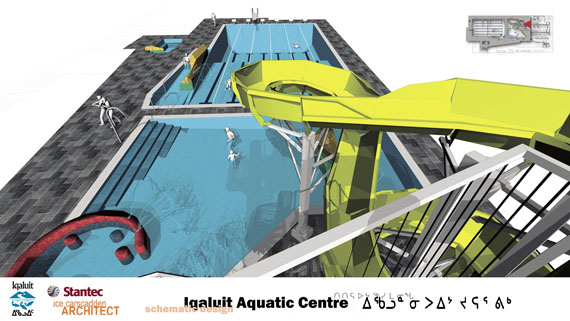 This design by Stantec shows the water slide and pools planned for the second floor of Iqaluit’s proposed aquatic centre. (IMAGE COURTESY OF STANTEC)

The City of Iqaluit has moved one step closer to completion of its highly anticipated three-story aquatic centre.

That means 30 per cent of the total design for the aquatic centre is now completed, which includes how the aquatic centre would look on the inside and outside, where parking spaces would go, how the pool would be laid out, and more.

“I honestly thought you were going to come in here and give us old-fashioned blue [prints],” Graham said to the aquatic project team.

“What we’re really doing here is touching the future for the kids of tomorrow. And I’m very proud to make a motion, now, to approve the aquatic centre schematic design, and to proceed to the next design development,” Graham said just before committee members unanimously passed the motion to accept the design.

The project team leader for the aquatic centre, Joshua Armstrong, said many people were consulted for the design of the building — from snow-plow workers to the disability association and elders.

And although some of the finer details are still yet to be determined, most of the broader design is now more or less done.

“Those basic big ideas are pretty much nailed down now,” Armstrong said.

The centre, which would be tower over the current arena building, is planned at three stories high and would be lifted on piles four feet off the ground.

On the ground floor, plans call for an entrance, a REACH office, and a café for sandwiches. The Vancouver Aquarium is in now in talks with the city to possibly donate an aquarium that could be located there as well.

A fully equipped pool with change rooms would sit on the second floor, along with a party room and big windows so parents can watch their kids play in the water.

The city’s recreation director, Amy Elgersma, said she is in talks with the World Wildlife Fund creating a mural of arctic animals on the second floor.

The third floor would house a fitness centre that would be run by the City of Iqaluit with the not-for-profit organization Atii Fitness as a partner.

The third floor would also feature views of the pool, and the city, through large windows that would bring as much natural light as possible into the building.

Right now, Atii Fitness is located in a space next to the airport, but will move in once the pool is completed in 2016.

The fitness centre would be “two-to-three times bigger” than Atii’s current location.

As for the pool itself, it would be a six-lane Federation Internationale de Natation (FINA) standard pool, meaning it would meet international guidelines for aquatics competition.

There will also be an “adult spa area” in the corner of the pool room with a sauna and hot pool.

And there would be a separate pool designed for younger patrons with water tunnel and bubble pool for toddlers, as well as a “colourful slide.”

The water slide would be the main attraction in the pool room — it’s planned at either 6.4 metres high or 4.8 metres — and one spring board for diving that would be one metre high.

Armstrong said 250 people could “comfortably” fit into the pool room at one time, although Nunavut building codes and various other building codes from other provinces dictate that it could be over 300.

But there is still some debate over how the aquatic centre should look.

For instance, Coun. Simon Nattaq commented that the inuksuk that Stantec proposes using as an outdoor ornament at the entrance of the building reminded some of a “murderer.”

Coun. Joanasie Akumalik said he’s sick of the inuksuk being used as a symbol for Iqaluit, and wants to see something else — perhaps an arctic char — to represent the building.

Stantec stressed how they want to design the building in the “silver” category of the Leadership in Energy and Environmental Design (LEED) rankings, just one step higher than the minimum, “certified” level.

The building ranks five points short of that ranking now, however.

Currently the building is at 45 points, but it needs 50 points to make the silver ranking.

“That is very difficult to achieve for the North, actually. It’s a very big milestone for the North,” Armstrong said, “because the rating system is made for southern markets.”

Armstrong also stressed that accessibility to the building is of upmost priority, so that all the people of Iqaluit can enjoy the centre.

And there are plans to make a crosswalk across the street to encourage people to walk to the centre.

Stantec will hold what it calls an energy performance workshop July 25, where all of Stantec’s experts will do a calculation model on the building’s energy efficiency.

Following this week’s meeting, the next 30 per cent of the schematic plan will be designed. The deadline for that design to be completed would be some time in September, Armstrong said.