Nitrogen dioxide from refrigeration system may have poisoned young players 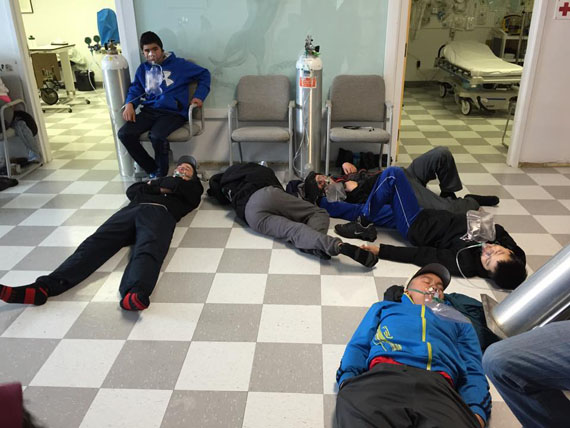 NYHDP players are treated with oxygen at Kangiqsualujjuaq’s health centre April 11 after coming down with headaches and sore throats after they are believed to have been poisoned by nitrogen dioxide leaking from a refrigeration system at the local hockey arena. No one was seriously injured. (PHOTO COURTESY OF NORDIKS NYHDP)

Hockey players, coaches and spectators who fell ill during a weekend hockey tournament in Kangiqsualujjuaq have all recovered and are symptom-free, said the Nunavik Regional Board of Health and Social Services April 14.

The region’s public health department has been investigating an incident that left more than 130 people in medical care April 11 and shut down a bantam hockey tournament in the Ungava Bay community.

Co-ordinators of the Nunavik Youth Hockey Development Program cancelled the bantam tournament after many players, all under 15, developed coughs, sore throats and headaches.

In an April 14 release, public health officials said they are working with the Kativik Regional Government and Northern Villages to identify the cause of the illness, but, for now, say the cause of the incident remains undetermined.

Health board technicians were in Kangiqsualujjuaq April 15 to do air quality tests at the arena.

Organizers of the tournament have said the illnesses may be linked to a refrigeration system malfunction at the arena, which could have leaked nitrogen dioxide gas into the building, the former hockey star Joé Juneau, a Nunavik Youth Hockey Develop Program organizer, wrote in an April 12 Facebook post.

Short-term nitrogen dioxide poisoning, with exposure ranging from 30 minutes to 24 hours, may cause lung inflammation and irritation, leading to severe breathing problems.

But sources in the community say the illness was likely caused by fumes from the arena’s zamboni, which went undetected due to the arena’s broken C02 detector.

That’s because the detector was recently vandalized. Normally, the system would have detected the noxious fumes, starting an automated fan system.

Once people in the arena began to show symptoms of discomfort April 11, the arena was closed, Juneau said.

More than 130 players, coaches and spectators were treated and tested at the local health centre and many were put on oxygen masks.

Kangiqsualujjuaq, which has a population of less than 900 residents, didn’t have enough health staff to handle everyone.

Three doctors and three nurses flew in from Kuujjuaq April 11 — about a half an hour away by air — to care for the affected people.

Of these, 29 were kept under close surveillance, while two players were flown to Kuujjuaq for further medical treatment.

But none of their symptoms turned out to be serious, Juneau said.

“Great medical staff from Kangiqsualujjuaq and Kuujjuaq worked all night to attend and take good care of all our Bantams,” he said. “I can assure that many people in charge did their very best to make sure everyone was safe and well taken care of, considering what happened.”

The NYHDP players and coaches flew back to their villages April 12 and April 13.

The hockey arena in Kangiqsuallujuaq remains closed until further notice.