Glaucous gull population cut in half since the 1980s 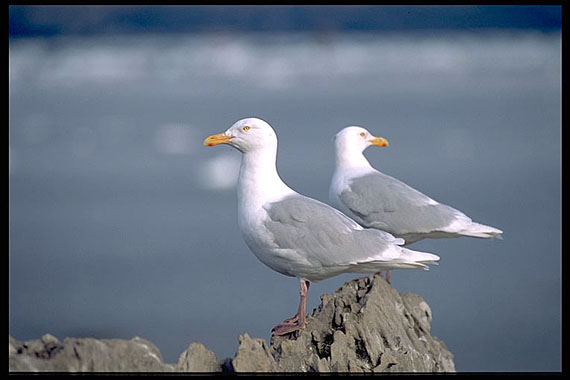 Two glaucous gulls perch on a rock in Nunavut. Researchers are finding new contaminants in the gulls, whose population has been cut in half since the 1980s. (PHOTO COURTESY OF JONATHAN VERREAULT)

A cocktail of contaminants could threaten to further push the Arctic’s population of glaucous gulls into decline, a Canadian scientist has found.

The breeding population of the glaucous gull — which looks like your average seagull — has halved in the Canadian Arctic since the 1980s.

Several contaminants, plus other threats that endanger the gull, like global warming and new parasites in the environment, work together to harm the gull, explained Jonathan Verreault, a professor at Université du Québec à Montréal and a Canada research chair in comparative avian toxicology.

Verreault studied the gulls near Cape Dorset in 2012 and found levels of contaminants like mercury, polybrominated diphenylether (PBDE) and halogenated flame-retardants in the gulls’ livers, eggs and plasma.

The study’s extract says the gull is a “bioindicator species” that “provides clear evidence that the Cape Dorset marine food web accumulates a complex mixture of legacy and more recently introduced chemicals of potential health concern to Arctic wildlife.”

Although Verreault said he was “surprised” to find these levels of contaminants in the gulls, contaminants might not be the leading factor in the decline — although he’s worried the problem might worsen over time.

“Contaminants I’m sure is part of the picture, but it’s not the driver. It’s part of it. It’s one of the stressors affecting the gulls.”

In the study, carried out in 2012 and 2013 and funded by the Northern Contaminants Program, the group of researchers found high levels of mercury and methyl mercury in the birds’ livers.

And they found low levels of six “unstudied” flame-retardants were present in the gulls’ livers as well.

Flame-retardants are chemicals added to products to help stop the spread of flames in a common house fire. They are found in all household products like telephones, couches and televisions.

These chemicals are swept up North by “dominating atmospheric currents” that travel long distances.

Verreault said banned substances like those from the 1980s and PBDE’s are being replaced by these newer, toxic flame-retardants.

“We’re seeing these new types of contaminants coming up in the Arctic marine food web and in top predators like polar bears and glaucous gulls,” Verreault said.

The flame-retardants are one ingredient in that “cocktail” of contaminants that is a big worry for Verreault.

“We should really monitor these compounds over time. If they’re replacement products and there’s no regulations for their use, one can imagine that their levels will be increasing,” Verreault said.

Chemicals in those flame-retardants can “effect your immune system, [neurological]— so, having effects in the brain — enzymes and hormones,” Verreault said.

Mercury is also a worry for Verreault. Mercury has been filtering up to the Arctic for years now, and a high level of mercury was found in the gulls.

But there’s not much Canada can do about that, Verreault said.

For now, Verreault is calling for stricter regulations for flame-retardants, such as those found in Europe.

“In Europe they have to prove that the product they want to use is not persistent, it’s not bioaccumulating in species, and it’s not toxic,” he said.

“We don’t have the legislative approach to limit the use of those compounds before they’re used in consumer product.”