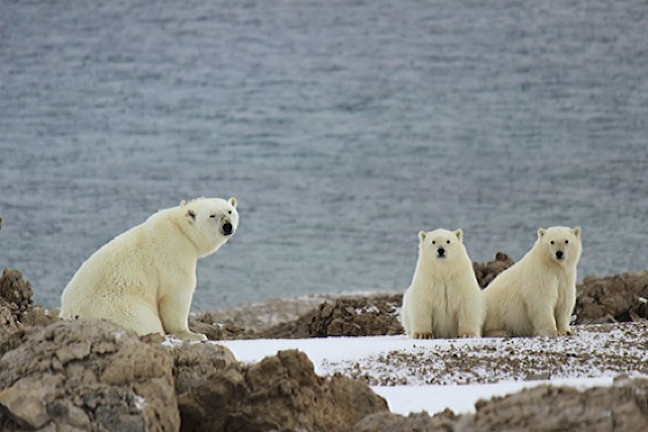 Polar bears are a common sight in Churchill, MB, but aggressive attacks, like the one which happened in town the morning after Halloween, has left more than a few residents shaken. (FILE PHOTO)

A man who saved a woman in an early morning polar bear attack in Churchill, Man. has been medevaced to Winnipeg.

Bill Ayotte, a former employee of the town of Churchill and now retired, was airlifted Nov. 1 following an aggressive attack in town that left him and another woman seriously injured.

“I went over to the hospital to see him and he’s being medevaced out,” said Doug Webber, Ayotte’s neighbour and another lifelong resident of the northern Manitoba town. “I guess his injuries were serious enough to demand surgery.”

Webber said the attack, which occurred before dawn at around 5 a.m., began when a young male bear attacked a woman.

Ayotte, who heard the screams, went outside to help, distracting the bear long enough to allow the woman to seek safety inside Ayotte’s house.

But then the bear began attacking Ayotte.

How the next few terrifying minutes unfolded depends on who you ask, Webber said. Everything happened so fast.

“It’s still kind of confusing,” Webber said. “It leaves you a bit shaken.”

As best he can recall, neighbours came out of their homes to help, firing off 12-gauge cracker shells, which send out exploding projectiles, and also flare guns to try to scare the bear away. But it kept on mauling Ayotte.

Eventually one projectile exploded near enough the bear to spook it into leaving its prey, Webber said. Some media reported that the bear only took off after it had been pushed by a moving vehicle.

Webber and his neighbours quickly placed Ayotte into a truck and drove him to the Churchill hospital. On the way, they met the ambulance and told paramedics a woman had also been attacked but they didn’t know where she ended up.

Meanwhile a visitor of Ayotte’s who knew nothing of the attack, came downstairs and discovered a woman in the house, injured and bleeding from the attack.

While the woman was tending to the victim’s injuries, paramedics knocked on the door, found the victim there and took her to hospital.

Natural resource officers eventually tracked and killed the bear. Media reports say another bear, a female not involved in the attack, was also found near town and killed. Her cub was discovered nearby and taken to a holding facility.

Webber runs a fishing and hunting lodge on the coast of Hudson Bay and says he’s had 30 or 40 polar bear encounters over the years but has never been injured, unlike some of his family members who have been bitten and mauled.

He said he can’t understand why he didn’t get his shotgun when Ayotte was being attacked because that’s standard procedure in his line of work. But in the midst of all the panic and shrieking, it completely slipped his mind.

“At least I helped Bill get to the hospital,” he said, consoling himself.

An aggressive attack in town like this, while rare, is not unheard of, Webber added. He says there have been about a dozen such attacks in the past 30 years which have left people seriously injured and, in a few cases, fatally.