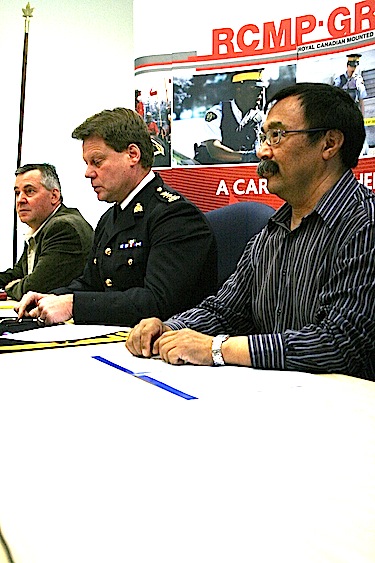 Don’t be surprised if you see an RCMP member or conservation officer knocking on your door and asking about your gun in the near future.

The RCMP and the Government of Nunavut are teaming up in an effort to reduce firearms violence through a new firearm awareness campaign in Nunavut communities.

The campaign is a direct response to many firearm-related incidents in Nunavut this year and last.

Among the 73 calls for service reported to the RCMP V Division, 19 cases were cleared by charges, 29 were identified as non-criminal complaints, and 14 were cleared at “departmental discretion.”

The most prominent complaints in 2012 included 17 instances of careless use of a firearm, 17 breaches of the Firearms Act or “other activities” and nine instances of unsafe storage of firearms.

“We started looking at these 73 incidents in a more analytical mindset, [and] it became very apparent to us that based on where we are going, where we had been, there’s a need to enhance our level of engagement with the communities,” RCMP Chief Supt. Steve McVarnock told reporters at a Sept. 28 press conference in Iqaluit.

The campaign will encourage safe storage and firearms. RCMP members, alongside GN conservation officers, will knock on doors in Nunavut’s 25 communities, handing out trigger locks for guns and safety pamphlets.

The RCMP also wants to engage local communities via local radio to inform people about gun safety, an initiative that got underway this month in Clyde River.

And the RCMP will work with the Canadian Forces to deal with the storage of Canadian Rangers’ firearms by sending up storage units to every community.

McVarnock said the new campaign will be directed to all of Nunavut’s communities over the coming year.

“The attachment commanders, a lot of them are new. They’re coming in here the first week of November, and they’ll have the tools that they need to go back to their communities and implement a lot of these strategies as well,” McVarnock said.

His goal is to have every firearm in the territory equipped with a firelock, which he estimates could produce a 20 to 30 per cent reduction in firearms-related incidents.

Nunavut’s environment minister James Arreak also said it’s essential to include conservation officers in the safety campaign, because they have a good relationship with the community in dealing with firearms.

“Government of Nunavut wildlife officers are good at maintaining that balance and will be working alongside the RCMP on this essential campaign,” said Arreak in a news release.

“It is important to preserve and respect our Inuit hunting traditions, however, we also must balance the safety protocols when dealing with firearms,” he said.

The door-to-door campaign has already kicked off in Clyde River. Igloolik and Arviat are next in line.