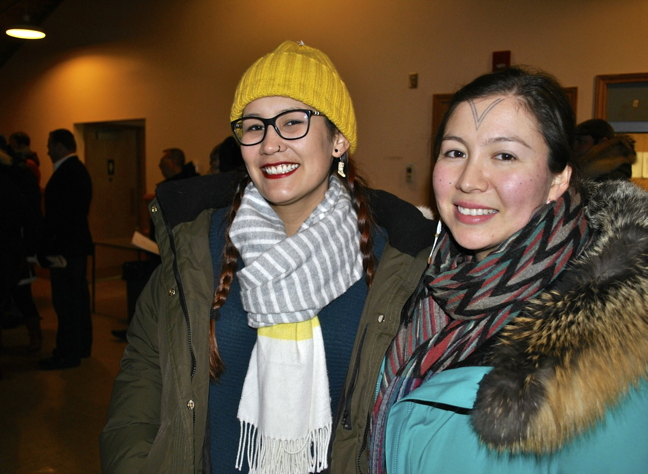 Laura Arngna’naaq, director of finance for the Dechinta Centre for Research and Learning in the Northwest Territories, and filmmaker Alethea Arnaquq-Baril of Iqaluit, were among the “youth leader” speakers who gave their views on how to improve Canada from the perspective of Northern indigenous peoples at The Walrus Talks event in Iqaluit, Nunavut, March 25. (PHOTO BY PETER VARGA) 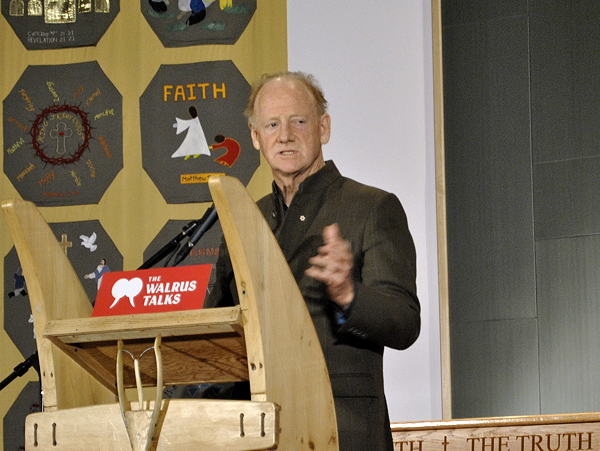 Essayist and novelist John Ralston Saul says the people of Nunavut need a university based in the territory. “Why is university-based northern expertise based in Victoria, Calgary, Quebec City – all across the south?” he asked a capacity audience at St. Jude’s Cathedral in Iqaluit, March 25. Saul was one of eight speakers in the Nunavut leg of the Walrus Talks national tour. (PHOTO BY PETER VARGA)

That’s the message a group of speakers, honoured nationally for their achievements in education and the arts, sent March 25 in Iqaluit on the Nunavut leg of a cross-country free lecture series to mark Canada’s 150th anniversary as a country.

“Canada remains the only circumpolar country without fully-fledged universities in the Arctic,” said essayist and author John Ralston Saul, who spoke as a member of the Order of Canada.

None of them, he said, “were started with the arcane rules” of Universities Canada, which sets criteria for the foundation and operation of universities in the country, “rules which are designed to force the imitation of the southern model.”

Saul spoke as one of eight guests before an audience of more than 300 at St. Jude’s Cathedral for the Iqaluit edition of the Walrus Talks, put on by the non-profit Walrus Foundation in major cities in every province and territory.

The foundation, which also publishes Walrus magazine, received a Canada 150th grant of $650,000 from the federal government to host cross-Canada events.

The series of talks features a mix of “youth leaders” and Order of Canada recipients invited to give views on how to improve the country, in line with the Order’s motto, “We Desire to Build a Better Country.”

Much like the five youth leaders and two fellow Order of Canada member speakers at the Iqaluit event, Saul focused on how to overcome the obstacles Nunavummiut face in developing the territory autonomously, and on their own terms.

“Why is Canada’s centre of polar bear expertise in a southern university?” he asked.

“Why is university-based northern expertise based in Victoria, Calgary, Quebec City? All across the South there are northern expert centres,” whose members “come up for a month in the summer or whatever—with very rarely any relationship with the communities,” Saul said, drawing laughs of acknowledgment from the audience.

“The answer isn’t very complicated. These centres, these departments bring in tens of millions of dollars every year,” he said.

A study commissioned by the territorial government, completed last year, concluded that a Nunavut university would not have enough enrolment to qualify as an institution of higher learning according to standards set by Universities Canada.

“I believe it was a classic consultant report, serving old interests,” Saul said.

“I cannot think of a system more likely to reinforce the wealth and the influence of the southern universities—a system in which they get to shape and, in effect own, programming developed through the colleges.

“In an absence of a university, young Inuit do not have local role models, a local context in which to identify themselves as leaders, a place to build self-confidence,” he said.

The lack of a Nunavut, or northern-based university that serves the interests of Canada’s Arctic peoples “marginalizes northern culture, and the full role of the Inuktitut language in the development of Northern expertise,” Saul said.

Some believe it is important to first build an education system from the ground up, concentrating on kindergarten to Grade 12, as is now the Government of Nunavut’s policy for introducing instruction in the Inuit language. But Saul said northerners shouldn’t have to settle for this.

Literacy levels in Canada in the mid-19th century were appalling, “but that didn’t stop them,” he said.

“They had no money, no education, and they built universities at the same time. So this [not building an Arctic-based university] is nonsense.”

The experience of the conference’s “youth leader” speakers demonstrated what northern-born and northern-raised youth must do to acquire higher education after high school, and how their connection to the territory stretches to a breaking point.

Speaker Laura Arngna’naaq, originally from Baker Lake and now director of finance for the Dechinta Centre for Research and Learning in Yellowknife, highlighted the challenges Inuit face in the effort to keep connected with their own people, when living in the South.

During her years as a university student in Toronto, easily 2,500 kilometres from her home community, she recalled meeting an Inuk youth from Nunavut who considered attending her school for political studies.

“This young man aimed to give back to the territory in a meaningful way but was unable to do so without having to travel across the country and leave this beautiful place for four years or more of his life,” Arngna’naaq said.

Moreover, “the culture shock and isolation of ending up in a larger city can be just as daunting,” she said. “Without a network and support, I see Nunavummiut give up their studies prior to completion, to return home.”

Even though she has achieved much in her educational and professional pursuits, Arngna’naaq admitted, “it has been a struggle for me to learn what I know about my ancestors’ way of life and traditions.

“It is something I continue to strive to learn about.”

This underlines the need for an Arctic-based university for peoples of Canada’s three northern territories, she said. Short of that, the best hope for Inuit peoples lies in online “digital connectivity” to share knowledge, “that is, both traditional and modern skills development.”