“An inquiry…. can only be designed after hearing from those directly affected” 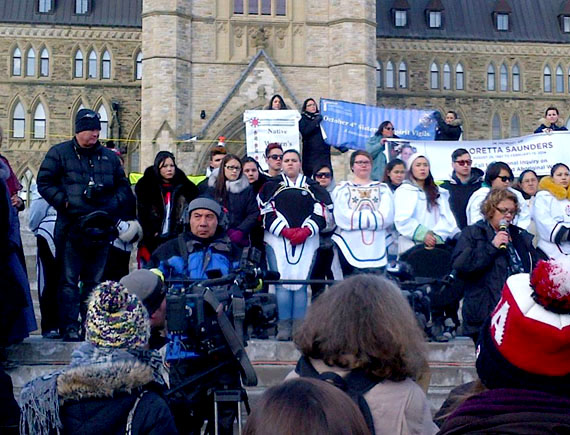 Nunavut Sivuniksavut students hold a vigil for murdered Nunatsiavut student Loretta Saunders in 2014, while calling for an inquiry into murdered and missing Indigenous women. (FILE PHOTO)

Carolyn Bennett, minister of Indigenous and Northern Affairs, will visit Iqaluit Jan. 29 to hold her first meeting with Nunavut families and organizations ahead of the federal government’s inquiry into missing and murdered Indigenous women in Canada.

To date, the Jan. 29 Iqaluit meeting is the government’s only stop planned in Nunavut, as part of a series of pre-inquiry meetings being held across the country this month and next.

There is no meeting scheduled for the Nunavik region, but a pre-inquiry gathering will be held in Montreal on Jan. 22.

“The government of Canada believes that an inquiry into missing and murdered Indigenous women and girls can only be designed after hearing from those directly affected,” said a statement posted to Indigenous and Northern Affairs Canada Jan. 11.

“The government is holding meetings across Canada with survivors, family members and loved ones of victims, as well as national Aboriginal, provincial and territorial representatives to seek their views on the design and scope of the inquiry.”

Bennett, along with federal Justice Minister Jody Wilson-Raybould and Patty Hajdu, the federal minister responsible for the status of women, are leading the Trudeau government’s work on designing and running the MMIW inquiry

In Iqaluit, the meeting’s participants are expected to include members of Pauktuutit Inuit Women of Canada and Qulliit Nunavut Status of Women.

The inquiry is finally shaping up after years of pressure from organizations like the Native Women’s Association of Canada to address the pervasive issue of violence faced by Indigenous Canadian women and allegations that police and justice system officials have ignored the crisis.

A 2014 RCMP report documents more than 1,200 cases of murdered and missing Indigenous women between 1980 and 2012, although it did not specify how many of them were Inuit.

But a 2015 United Nations report found that young First Nations, Métis and Inuit women were five times more likely to die under violent circumstances than their non-aboriginal counterparts.

Among the Truth and Reconciliation Commission’s recommendations last year; a call on the Canadian government to launch a national inquiry and investigate the violence and its relationship to the inter-generation legacy of residential schools.

Ottawa is covering the cost of travel to these meetings for survivors and their families as well as providing support workers to assist at the events.

The meetings are closed to the public, but there are a number of other ways to participate by phone, email or filling out an online survey here.

If you or a family member is a survivor and would like to attend the meeting, call toll-free 1-877-535-7309 or email ffada-mmiwg@aandc-aadnc.gc.ca