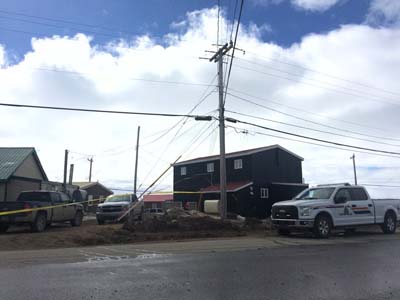 A Nunavut judge will decide this week if there is enough evidence to head to trial over a second-degree murder charge faced by Iqaluit man Daniel Hodgson. He is accused of killing Bradley Winsor, 23, who died at an Apex residence under suspicious circumstances. (FILE PHOTO)

Just over a year after an Iqaluit man was charged with the murder of a man in Apex, a preliminary inquiry kicked off for that case on Wednesday, June 27, at the Nunavut Court of Justice.

Daniel Hodgson is charged with the second-degree murder of Bradley Winsor, who was found unresponsive by police in an Apex residence on May 19, 2017.

Hodgson appeared, seated with his defence lawyers, wearing a dark-coloured suit. He has short salt and pepper hair.

This inquiry was set in March, and could run for three days.

News organizations are not permitted to publish any evidence presented at a preliminary inquiry.

But when the proceedings are over, Justice Bonnie Tulloch will determine whether there is enough evidence against Hodgson to proceed to trial and could confirm the charge, change it, or dismiss it.

She may also set a date for a trial.

A number of witnesses are to testify during the inquiry. They will appear in person and by video. The witnesses cannot be named.

“There is a strict publication ban on this matter … it’s completely off limits,” Justice Tulloch said. She gave this instruction and other similar instructions to witnesses and members of the public in attendance.

Witnesses who were not being questioned were banned from being in the courtroom while testimonies were given.

Last year, the RCMP said in a news release that they had responded to a call at an Apex residence at around 5 a.m. on May 19.

They found a man at the residence who was unconscious, and was subsequently pronounced dead at the Qikiqtani General Hospital. Police called the death suspicious.

RCMP arrested Hodgson shortly after, and in June 2017 he made a first appearance before a judge.

At the time he was arrested, Hodgson was 37. Winsor was 23 when he died.

After the May arrest, Hodgson was kept in custody at the Baffin Correctional Centre until July when he was granted restrictive bail and told he was only allowed to leave his home for work and emergencies.

He was also told at his bail hearing to stay away from the Iqaluit airport, and from the family of the deceased who could testify at a trial.

Court documents show the RCMP had two warrants to search the Apex residence following the death, but findings from any search are not available to the public.