Prepare for the unexpected on the land, Nunavut judge warns

Bad luck is no excuse for late return of rented snowmobile 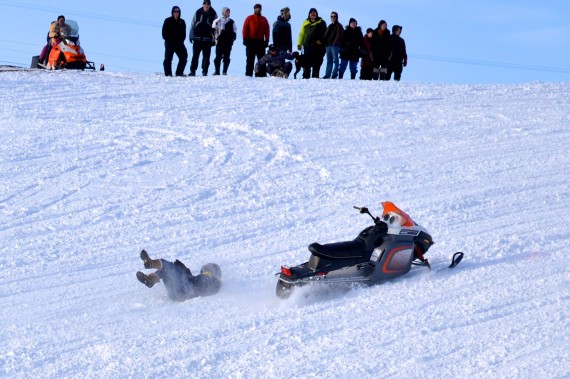 Bad luck out on the land will not save you from liability if your snowmobile rental is overdue, warns a timely civil court judgment released March 16, just as many Nunavummiut are gearing up for spring-time rides.

Justice Paul Bychok ruled in favour of an Iqaluit-based snowmobile rental business, Qairrulik Outfitting Ltd., which was seeking damages against a man who rented one of their machines, Peter Sholz, after Sholz was forced to abandon the snowmobile on the land when he ran out of gas.

As a result, Sholz missed a 5 p.m. deadline to return the snowmobile and was in breach of his rental contract, Bychok ruled, awarding about $1,500 in damages and recovery fees to the company’s owner, Guy Vachon.

“Mr. Sholz’s obligation under the contract was to return the snow machine in the same condition by 5 p.m. that day,” the judge wrote in his decision.

“In my view, this case is about a simple and straightforward commercial transaction.”

Unfortunately for Sholz, a series of unfortunate events didn’t help his courtroom defence.

First, Sholz wasn’t able to find a SPOT device or a GPS, which would have helped him signal for help.

He also didn’t pack an extra tank of gas, although Vachon and Sholz disagree about who advised that he purchase additional fuel.

So at 9 a.m., without extra fuel or any tracking device, Sholz departed for Ward Inlet in Frobisher Bay after renting the snowmobile from Vachon.

When he arrived at Ward Inlet, Sholz “discovered that it was low tide and the snow machine track had crumbled,” trapping him.

With less than half a tank of gas remaining, Sholz ran out of fuel trying to find another way out of the bay, and was forced to abandon the snowmobile on the sea ice.

He was later picked up by a passing helicopter.

Sholz argued in court that he fulfilled his duty of care for the machine by allegedly requesting additional gas, after explaining to Vachon where he was intending to go.

“Entire books have been written and much judicial ink spilled on what makes an enforceable contract,” Bychok said.

But the simplicity of this case’s contract, written out by hand, couldn’t have been clearer, and was copied verbatim into Bychok’s court decision for legal ease.

“Whatever discussions there may have been about various things—gasoline, a SPOT, a GPS, and the planned route—Mr. Sholz agreed to rent the machine subject to the terms included in the written contract,” Bychok said.

“If Mr. Sholz believed he needed a SPOT, or a GPS, or an extra tank of gas, or further information to ensure a safe trip, the onus was on him to obtain it.”

Bychok ruled that Sholz should pay Vachon’s legal costs, on top of the damages, amounting to $143.