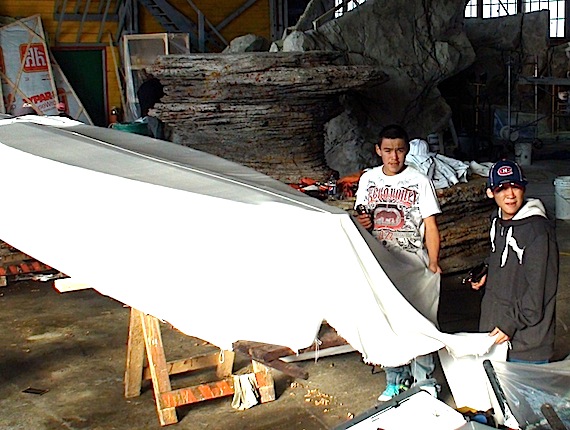 Iguarsivik students Noadamie Qumaluk and Charlie Sivuarapik traveled from Puvirnituq to Mingan on Quebec’s Lower North Shore to attach the covers on to a pair of umiaks that they and their classmates made for the film “Maïna.” (PHOTO COURTESY OF ALAIN CLOUTIER) 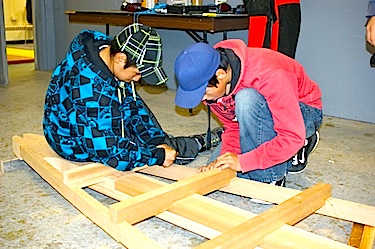 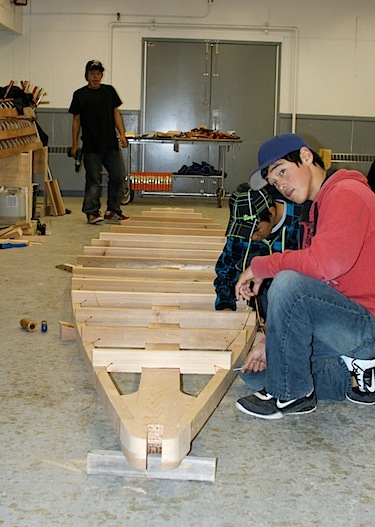 A group of students at Puvirnituq’s Iguarsivik School say they can’t wait until the film Maïna makes it into movie theatres.

Students in Alain Cloutier’s class recently crafted two umiaks for the made-in-Quebec film, which is now in production in Mingan, an Innu reserve on Quebec’s Lower North Shore.

It’s not the first time that Cloutier’s students have made umiaks and kayaks for use in films — in 2006, they helped produce the traditional boats used in Igloolik Isuma’s film, Before Tomorrow.

Inspired by the design of an 1885 Hudson Strait umiak pictured in the book, The Bark Canoes and Skin Boats of North America, the 25-foot umiaks made for Maïna are as authentic as possible, Cloutier said — although they’re covered in canvas spray-painted to look like walrus or seal skins.

The story told by the film Maïna, directed by Quebec filmmaker Michel Poulette, comes from a book of the same name by Dominique Demers.

It tells the aftermath of a bloody confrontation between the clan of Maïna, called the “Almost Wolves,” and the “Men from the Land of Ice.”

A synopsis of the film says Maïna, the daughter of Grand Chief Mishtenapuu, finds herself on a mission that will change the course of her life: she wants to keep a deathbed promise made to her friend Matsii, that she will retrieve Nipki, an 11-year-old boy captured by Inuit.

But on her quest, Maïna is taken captive by an Inuk leader called Natak and forced to travel with him back to the “Land of Ice.”

Her adventures there will be filmed in Nunavik next spring.

Cloutier received a call last month from Maïna‘s production team to see whether the umiaks used in Before Tomorrow were still in Puvirnituq.

They weren’t, Cloutier said, but he suggested his students could make more.

As videos posted on Isuma TV show, Cloutier’s students jumped into the project, making the umiak frames in record time.

Two of the students, Noadamie Qumaluk and Charlie Sivuarapik, accompanied Cloutier to Mingan to sew the coverings on to the frames.

Umiak-making isn’t part of the regular school curriculum, but Cloutier’s students are enrolled in the Independent Paths of Learning program.

The IPL program is designed for students aged 12 to 18 who face academic challenges or who are at risk of dropping out of school.

Its course of study, which differs widely from school to school, tries to offer students an alternative to academics, and to provide them with the life and work skills they’ll need later on.

“I put a lot of focus on their work ethic, so they that come in the morning and work all day — that’s already a step in the right direction,” Cloutier said.

His students have also become expert kayak-makers and kayakers, who are often called to demonstrate their skills, he said.