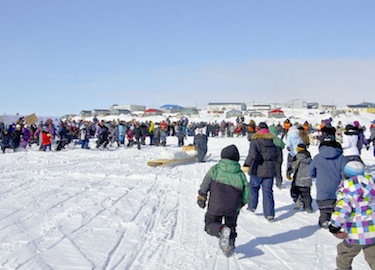 People rush to greet the winners as they cross over the finish line March 27 in Puvirnituq. (PHOTO BY PIERRE DUNNIGAN/ COURTESY OF MAKIVIK CORP.) 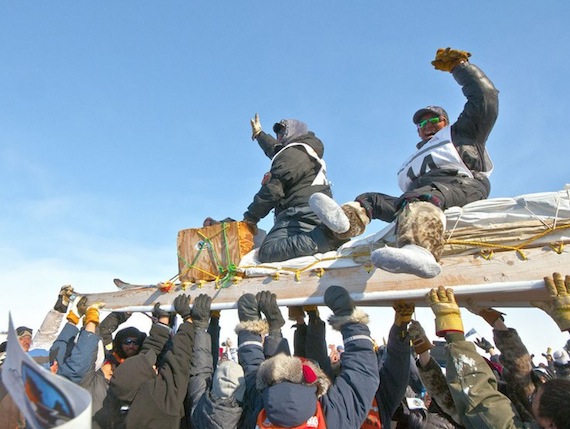 A triumphant arrival: Peter Ittukallak and Juani Nutaraaluk of Puvirnituq are carried on a komatik after they won the 2013 Ivakkak dog team race. (PHOTO BY PIERRE DUNNIGAN/ COURTESY OF MAKIVIK CORP.)

This year’s edition of Nunavik’s Ivakkak dog team ended as people ran across the ice in Purvirnituq to greet the winning team.

Mushers Peter Ittukallak and Juani Nutaraaluk of Puvirnituq crossed the finish line on March 27, as they won the final day’s leg of the race as well as overall, with a final time of 55 hours, 52 minutes and 11 seconds.

Allen Gordon and Willie Ningiuruvik of Kuujjuaq followed not far behind, finishing less than one hour later with a time of 56 hours 44 minutes after eight days of racing in 10 days of competition, March 18 to 27.

The father-daughter team of Noah and Minnie Ningiuruvik of Kangirsuk completed the last day of racing just behind the champions, finishing with the second-best time of the day at four hours 44 minutes. Minnie Ningiuruvik was the only woman taking part in the race, for her third straight year.

Willie Cain Jr. and Daniel Angnatuk of Tasiujaq finished a solid third overall, placing just behind the champions and Noah and Minnie’s team in the last day’s leg.

Ivakkak’s 12th edition traced a 632-km route along the shores of Hudson Bay, starting in Kuujjuaraapik on a sunny day with normal weather conditions.

March 19 marked the most challenging point in the race for many mushers. A storm picked up as the first team arrived at the Umiujaq checkpoint that day, and a white-out moved in as darkness fell.

The four last teams needed assistance due to the bad weather, with the final group not making it to the check-point until well after midnight.

A total of eight dogs had to be carried off in the “ambulance” komatik, according to organizers, some due to exhaustion and others due to old age.

Dog teams took the next day off to regroup and take a much-needed rest, and the race resumed on March 21 at 10 a.m.

Teams arrived in Puvirnituq in time for the community’s Snow Festival.

The winning team was celebrated by their hometown. They win $10,000 from Makivik, along with more than $17,000 in gift certificates from various sponsors, including the Fédération des Coopératives du Nouveau-Québec, First Air and Air Inuit.

The Ivakkak race was to wrap up with an awards ceremony in the evening of March 28, to be followed by a community feast on March 29.