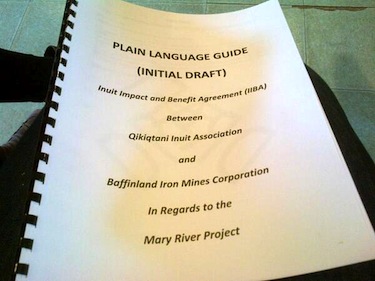 During the special board meeting of the Qikiqtani Inuit Association, which took place this past week in Iqaluit, board members decided to ratify the Inuit Impact and Benefits Agreement for the Mary River iron mine. This photo, circulated on Twitter, shows the cover of a plain language guide to the agreement. No specific details of the agreement have been released to the public. 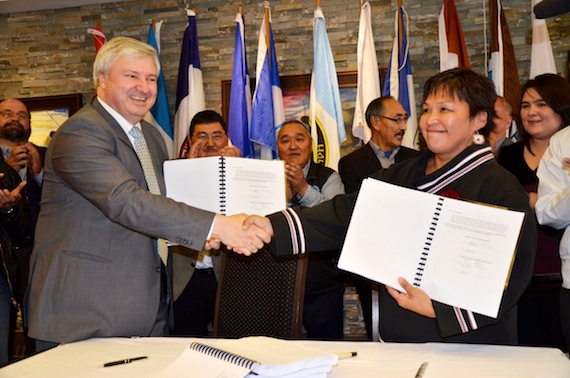 Tom Paddon (left,) president and chief executive officer of the Baffinland Iron Mines Corp. and Okalik Eegeesiak, president of the Qikiqtani Inuit Association, shake hands after they sign an Inuit impact and benefit agreement and a commercial production lease Sept. 6 at the Discovery Lodge in Iqaluit for Baffinland’s proposed Mary River iron mine project on northern Baffin Island. (PHOTO BY DAVID MURPHY)

The official signing of the two agreements, which followed a special QIA board meeting in Iqaluit this past week, took place Sept. 6 at 3:30 p.m. inside the Discovery Lodge hotel in Iqaluit.

The QIA’s board of directors, who serve as community representatives, ratified the agreement Sept. 5, the QIA said in a news release.

“These agreements turn the page in QIA’s partnership with Baffinland and put Inuit interests at the forefront of the mine’s impacts and benefits. The agreements also provide clarity to Baffinland on Inuit expectations surrounding its investment in Nunavut,” the QIA said in a news release.

“This is a historic deal for Inuit of the Qikiqtaaluk region and for all of Nunavut and has the potential to positively change the economic and social fabric of the territory. We are satisfied with the terms and conditions of the agreement which maximizes benefits while minimizing impacts,” said the QIA’s president Okalik Eegeesiak in the release.

Tom Paddon, Baffinland’s president and chief executive officer, said the company is “very pleased to have concluded the negotiation of these important agreements with the QIA.”

“We believe that this accomplishment clearly demonstrates Baffinland’s commitment to working cooperatively with the Qikiqtani Inuit Association, which represents the interests of residents of the Qikiqtaaluk Region. Resource development projects, such as Mary River, have the ability to have a profound positive effect and we will be working closely with the QIA to achieve this goal,” Paddon said.

Cathy Towtongie, president of Nunavut Tunngavik Inc. also chimed in with a message of congratulations.

“During the last 10 years, this project expended millions of dollars on goods and services from Inuit-owned businesses and joint ventures, and millions more employing and training Inuit and Northerners. I trust that the terms of the IIBA will put even more benefits into the hands of Inuit,” Towtongie said.

The agreement’s specific measures have not yet been released to the public, although a “Plain Language Guide to the Mary River Inuit Impact and Benefit Agreement” is now available on the QIA website.

No financial information, including the value of various revenues flowing to QIA, has so far been released to the public.

An NTI news release said that because the Mary project sits on Inuit-owned land, and NTI holds subsurface title to part of the area, “Inuit will receive significant mineral royalties in the years to come.”

So far, none of the parties has disclosed the potential annual dollar amount of those Mary River royalty revenues.

Article 26 of the Nunavut Land Claims Agreement requires that before a large development project, like Mary River, can proceed in Nunavut, an IIBA must be reached with a designated Inuit organization.

For Mary River to operate as a mine, QIA and Baffinland also had to finalize a commercial production lease.

This lease deals with things like rent, boundaries, water use fees, a quarry concession agreement, environmental conditions, authorities for QIA inspectors and auditors, required plans and reporting, and the amount and type of financial security.

Baffinland wants to build an iron mine at Mary River that would produce 3.5 million tonnes of iron ore a year — a big step down from the much larger mine that the company planned to build until this past January, when owners announced they would go ahead with a scaled-down project.

The “early revenue” phase of that scaled-down project would lead eventually to the construction of a larger, approved project to be completed within five years — by early 2019 — and, by 2020, 20 million tonnes of ore would start flowing from Mary River.

The agreements will be in place throughout the life of the mine and “provide a structure to ensure both parties are cooperating to mutually benefit from the Mary River development.”

An open letter to beneficiaries of the QIA, posted Sept. 6, promised “Inuit will be involved in many aspects of this project and will be paying attention and taking part in making sure that these agreements are carried out and implemented in a meaningful way.

“It will be important for Inuit to become more involved in the implementation of these agreements in order to help realize critical roles for Inuit in environmental stewardship, training, education, social programming and helping to breathe life into environmental protection measures.”