“We have made great progress” 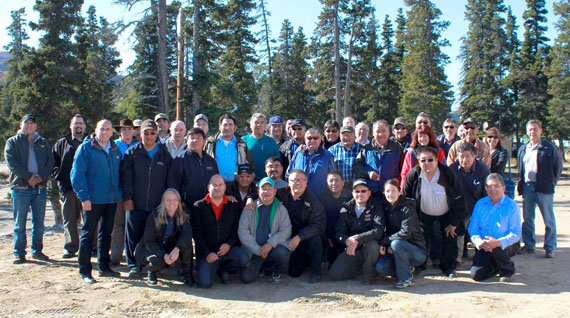 Participants in the Ungava Peninsula Caribou Aboriginal Round Table met in Nain, Labrador last week. The group said they will produce a conservation plan for the region’s three caribou herds by next April. (HANDOUT PHOTO)

Members of the Ungava Caribou Aboriginal Roundtable say they continue to make progress towards a conservation plan for the ailing caribou herds in Labrador and northern Quebec.

The roundtable, whose membership includes the Inuit of Nunavik and Nunatsiavut along with the Naskapi, Cree, Innu and Métis nations, was created earlier this year to address the drastic drop in local herd numbers in recent years.

“We have made great progress since the first coming together of the round table,” said Adamie Delisle Alaku, Nunavik representative and co-chair of the roundtable, “considering the many views and opinions around the table, the progress is incredible and most importantly it is built on consensus and genuine trust.”

One example of those “many views:” Newfoundland put a five-year ban on all caribou hunting earlier this year in Labrador, which Inuit say they’re ready to respect for two years, but which Innu have contested.

Despite the differences in opinion, all members agree they must slow the decline of the George River caribou herd and the uncertain future of the Leaf River and Torngat herds.

“All nations and aboriginal governments are committed to sacrifices aimed at ensuring the survival of Ungava caribou, in particular for the George River herd,” says a Sept. 27 news release.

“We all understand the severity in the decline of the George River herd, and we’re trying to help preserve its future,” Alaku said. “Nunavik hasn’t even seen the heard for three years.”

The George River herd population is currently estimated at only about 27,600 animals.

One of the roundtable’s priorities in ensuring the sustenance hunt can carry on in Aboriginal communities, with participating nations look at alternative sources of food.

One of those potential sources is marine mammals, but Alaku said groups outside Quebec are also asking about access to the Leaf River herd – a herd that is not considered to be in top health.

The results of the 2011 population survey of Nunavik’s Leaf River caribou herd established the size of the herd at 430,000 caribou — give or take about 98,000 animals. Adult survival rates and the number of calves produced were low, the survey found.

“It’s a touchy subject for (Quebec’s) Cree, Naskapi and Inuit,” Alaku told Nunatsiaq News, “because we have treaty rights under the James Bay and Northern Quebec Agreement, and some nations don’t have treaties.”

Fortunately, Alaku said, Nunavik has its own program in place to ensure Nunavimmiut get their share of country foods when animals are scarce.

Though the region’s hunter support program, meat from one community is divided and shared with other communities in need. Last winter in Kuujjuaraapik, where there happened to be an abundance of Leaf River caribou, the animals were hunted and shared with communities along the Ungava coast where fewer caribou had come the previous season.

But not all nations have that kind of support, Alaku said, which is difficult for communities that rely on the caribou, both for their livelihood and spiritually.

All these issues must be discussed at regional levels before the caribou roundtable meets a fourth time, in April 2014.

That’s when the group is expected to table a conservation plan to help protect the future of all three herds, a plan that is meant to address both scientific and aboriginal knowledge, habitat conservation, harvesting, monitoring and food security.