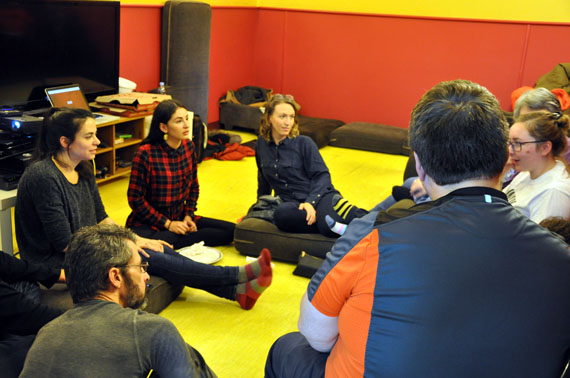 KUUJJUAQ—Knowledge is power, and better access to education would go a long way in helping Nunavimmiut take control over their own futures.

That’s what a group of Kuujjuamiut said when asked about the barriers they face in achieving success and self-determination.

“To be a decision maker, you have to be an educated person,” said Anthony Arreak.

“But I have a lot of strong feeling about education. I’m not sure the southern system fits our needs,” he said during a group discussion Nov. 26 at Kuujjuaq’s Youth Centre.

“It’s about finding a balance between our own culture and southern education.”

The discussion was led by Maïtee Labrecque-Saganash, a Cree activist and political science student who helped to launch a citizens’ collective this fall.

Faut qu’on se parle (Let’s Talk Together) was put together by a group of prominent Quebecers like economist Jean-Martin Aussant, agriculturalist Claire Bolduc and student activist Gabriel Nadeau-Dubois, who share a common concern: the direction the Quebec government has taken in recent years, towards austerity, tuition hikes and pipelines.

Since September, the self-funded collective has hosted most than 200 consultations in kitchens, cafes and community centres across the province.

“We’re going around to hear people’s concerns, but also to hear people’s ideas to change the system to better hear people like us,” Labrecque-Saganash told a few dozen participants in Kuujjuaq, many of them educators and social workers.

“We want to hear your ideas and turn around this system that forgets us.”

The consultation sessions are broken down into 10 themes, including health, the economy, education, environment, cultural diversity and Indigenous rights.

And the goal is to capture the concerns and ideas from a broad spectrum; from Quebecers who may not feel they’re engaged in decision-making.

“A lot of time regular people feel like that don’t have a voice,” said Kuujjuaq youth advocate Olivia Ikey Duncan, who took part in the Nov. 26 session. “That’s what I think is keeping people from having power.”

Labreque-Saganash said that in the 35-or-so sessions she’s lead over the last two months, she expected that economics would dominate the discussion.

“But everyone is concerned about education,” she said following the Kuujjuaq consultation. “People are really re-thinking how we could make schools a really healthy community space.”

Hearing from youth in the province’s most northerly reaches is important, Labrecque-Saganash noted, as those Quebecers face the biggest barriers to education, especially at a post-secondary level.

That’s not to mention other issues unique to the North: access to adequate housing, health services and fresh, affordable food.

As an Indigenous woman, she said she also expected to encounter racism during the cross-Quebec tour, when participants were asked for their thoughts on Indigenous rights and reconciliation.

She said she was pleasantly surprised.

“People are actually admitting that they don’t know much about Indigenous people and their culture,” Labrecque-Saganash said. “So maybe the next generation of native and Inuit won’t have to face the same things we faced.”

Faut qu’on se parle plans to host a session in Puvirnituq this upcoming weekend (stay tuned to the group’s Facebook page for details.)

Once the consultation process wraps up Dec. 8, the group plans to compile the tour’s input into a book to be made available to the public.

“The goal is to put pressure on the government, and say, hey, this is what the public wants,” Labrecque-Saganash said.