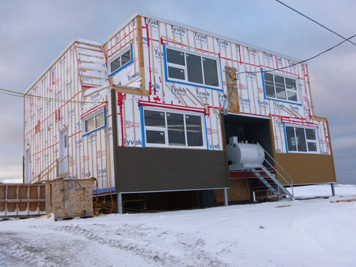 A house sits under construction in Kuujjuaq this past spring. The Quebec government recently amended legislation regulating hiring within the industry, which will lead the creation of a construction workforce placement region for Nunavik by June 2017. (FILE PHOTO)

Nunavik has moved an important step closer to creating its own regional construction workforce.

The government of Quebec recently amended legislation regulating hiring within the industry, which will lead to the creation of a construction workforce placement region for Nunavik by June 2017.

The Commission de la construction du Québec (CCQ) has always grouped Nunavik into two of the association’s other regions: Umiujaq and Kuujjuaraapik fall into Quebec’s James Bay region, while Nunavik’s other 12 communities are grouped under the Côte Nord region.

This means that construction workers from either of those regions have had priority hiring on Nunavik-based construction projects.

Now the region has two years to adapt and help transition those workers into regular apprentice or occupation competency certificates.

“We want to ensure we can maintain our pool of workers in Nunavik,” Loiselle said.

The hope is that the new designation will translate into funding for better training in the region, she said, and more local jobs for Inuit communities.

According to the most recent statistics, workers put in 800,000 construction hours in Nunavik communities in 2012.

But the vast majority of those workers flew up from the South; Inuit construction workers only filled about 40,000 of those hours.

The new placement region will still allow the hiring of workers from other Quebec regions, but it will be required to follow conditions set out in the new regulation.

The Kativik School Board and Nunavik’s Inuit birthright organization, Makivik Corp., also lobbied hard to see the placement region come to be.

Makivik president Jobie Tukkiapik noted the new measures would finally bring labour hiring and mobility rules in the industry in line with the James Bay and Northern Quebec Agreement.

“This is a very positive step forward for Nunavik Inuit,” Tukkiapik said in a release.