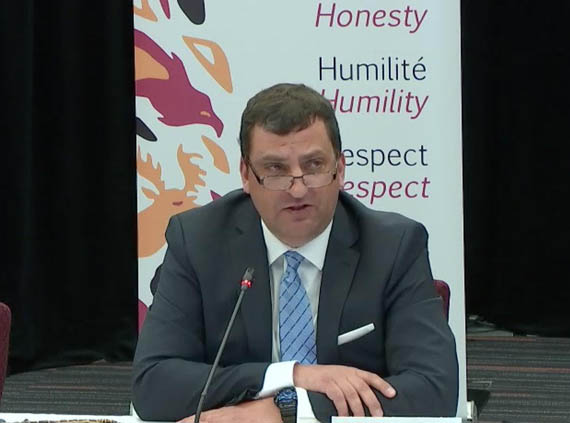 Richard Coleman from Quebec’s public security ministry spoke before the Viens commission March 21 in Montreal. Coleman fielded questions on the difference in the cost of policing between the Sûrété du Québec provincial police compared to Quebec’s Aboriginal police forces.

Commissioner Jacques Viens is calling on the Quebec and Canadian governments to extend a looming deadline for provincial police forces to sign off on new five-year funding agreements.

Viens is the retired Quebec judge presiding over a provincial inquiry looking into how Quebec’s Indigenous population interacts with certain government services, including police services.

In Quebec, a number of Indigenous police forces, including the Kativik Regional Police Force in Nunavik, are currently negotiating new tripartite funding agreements to replace current ones that will expire March 31.

Following testimony made to the commission March 21 and March 22 on the challenges those police forces face, Viens asked the government to postpone that negotiation process by up to one year.

“This delay will allow concerned Aboriginal police forces to truly negotiate with the authorities on their respective needs that may be different from one community to another,” the commissioner said in a March 23 news release.

“Just like the Sûreté du Québec … or any other municipal police force, it looks obvious for the commission that Aboriginal police forces are also an essential service in their communities,” Viens said.

“With the upcoming deadline, [Indigenous police forces] are trapped in a situation where they have to sign an agreement in order to keep their police forces from being dissolved or to pursue their activities without any financial support.”

The governments of Quebec and Canada share the cost of financing the KRPF in proportions of 48 and 52 per cent, respectively. The new agreement would fund the force from April 1, 2018 through March 2023.

Last December, the KRPF submitted its funding request to both levels of government. The KRPF’s former chief, Michel Martin, who resigned in February, was contracted to help negotiate the new agreement.

Under the new agreement, the KRPF has asked for additional money to train its officers to detect impaired drivers, ahead of the federal government’s plans to legalize the recreational use of marijuana by this summer.

The KRPF declined to comment on those negotiations this week, nor would it say if the force supported Viens’ request.

But First Nations leaders and police chiefs told the commission last week that their organizations are chronically underfunded and not given the same consideration as other provincial or municipal police forces in Quebec.

In the March 23 release, Viens said the testimony given to the commission suggested Indigenous police forces only just received responses from both levels of governments, indicating “absence of genuine negotiations.”