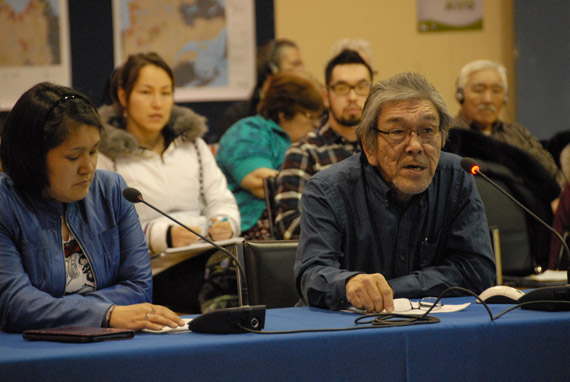 A new report says it would be “premature” to allow the uranium sector to develop in Quebec, given the lack of both information and social acceptance on the issue.

And while the commission found the uranium mining sector has seen major progress in technology and waste management, it found that there are too many unanswered questions about the industry.

The 600-page report also noted significant gaps in scientific knowledge about the impacts of uranium mining on the environment and public health.

“Given this situation, the participants at the hearings were almost unanimous in their rejection of uranium sector development,” the French-language report said.

“Accordingly, the inquiry commission has concluded that it would be premature, at this time, to authorize uranium industry development in Quebec.”

The report echoes many of the same concerns presented to the commission by Nunavimmiut, who, as a region, came out against uranium development because of the risk of environmental contamination.

“The risk of contamination would cut us off from our traditional country foods,” said Jobie Tukkiapik, president of the Makivik Corp., last December. “The negative impacts would be nungusuittuq, meaning something that will never perish.”

Both the Kativik Regional Government and Makivik agreed Nunavik Inuit feel they can’t make an informed decision on the subject, due to the lack of information on the industry available in both English and Inuktitut.

Chapter 13 of the BAPE’s report highlights the three sub-commissions who helped lead its consultations with Quebec Inuit, Cree and Naskapi, as signatories of the James Bay and Northern Quebec Agreement, and the complimentary Northeastern Quebec Agreement.

Those northern regions — James Bay and Nunavik — happen to be where the majority of Quebec’s uranium mining claims are located.

The report concluded that the psychological and social impacts of uranium industry development could be harmful to Aboriginal communities in those regions, because of their attachment to the natural environment, their culture and their way of life.

Those three commissions found, however, that the mechanisms in those treaties provide “a suitable management framework” for potential uranium projects in the North.

In Nunavik, the KRG and Makivik have yet to comment on the report.

Nunavik’s Cree neighbours along James Bay say the social acceptability of proposed developments will continue to be “fundamental.”

“The BAPE has recognized that the special legal framework and social institutions that govern in Eeyou Istchee must play a central role in legitimate decision-making about development in our territory,” said grand chief Matthew Coon Come in a July 17 release.

In any case, the ball is now in the court of the province, which has agreed to strike a committee to analyze the BAPE’s findings.

The commission says that, while the Quebec government could decide to suspend uranium mining, it should first consider the potential legal and economic impacts.

And should the province decide to open the door to uranium mining in Quebec, it should first satisfy certain requirements, one being social acceptability.

Secondly, Quebec should gather more reliable knowledge on the industry, and finally, the province has to develop a legal framework harmonized with federal legislation that would allow it to control uranium mining operations, the report said.

The BAPE’s work is the result of a request from the provincial government to gauge public opinion on the future of the industry, because uranium — unlike other minerals — emits radiation.

No uranium has actually been mined in Quebec, and no exploration has occurred since 2013, when Quebec decided that it wouldn’t authorize any until after the BAPE assessment.

There are several hundred “mineralized occurrences,” or identified deposits, of uranium throughout Nunavik, most of them clustered around George River.

Those include Azimut’s two early-stage exploration projects on its Rae North and Daniel Lake properties, southeast of the Ungava Bay community of Kangiqsualujjuaq.

You can read the BAPE’s full French-language report here.