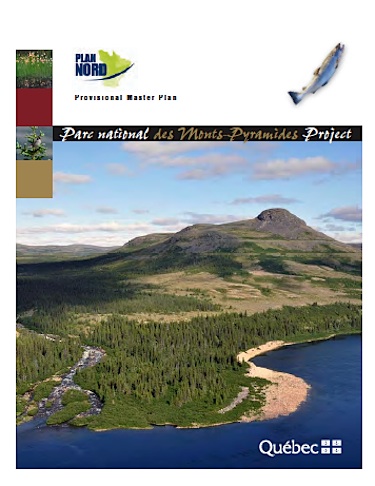 This document, called a master plan, spells out the proposed limits for the park around Mt. Pyramid, how it will be zoned and plans for its future development.

People in Nunavik will soon have a chance to say what they think about the region’s fourth provincial park, “le parc national des Monts-Pyramides.”

Quebec’s department of sustainable development, environment and parks announced last week that it will hold public hearings on the park in Kuujjuaq, Kangiqsualujjuaq and Kawawachikamach, the three communities closest to the proposed park, from Nov. 21 to 25.

The park, now officially known by its French name, also has an Inuktitut name – Ulittaniujalik, for the 457-metre high Mount Pyramid peak “that looks like it bears a high-water mark” for lines left by a glacial lake that once covered the area.

The park is supposed to protect lands in and around the George River plateau, about 120 kilometres south of Kangiqsualujjuaq, and shelter this region from some of the mining and mineral development expected to roll out of Plan Nord.

To prepare for the park hearings, Quebec’s department of sustainable development produced a master plan for the park, which spells out the proposed limits for this park, how it will be zoned and plans for its future development.

According to the plan, the park will spread over 5,272 square kilometres — about 240 sq. km. less than originally planned.

However, lands used by the Wedge Hills Lodge outfitter, northeast of Schefferville, were left out of the park.

That’s because the outfitter would have otherwise been forced out of business.

And active mining claims were also left outside the park’s boundaries.

But mineral-rich deposits along the western edge of the park could prove to be a problem to the “development” of the area, the master plan said, although “overall, about 70 per cent of the proposed boundary follows the watershed lines of the George and Ford rivers, reducing the risk of contamination from any mining activities that might take place outside the park.”

In any event, managing a park in this remote location will be hard due to the difficulty of access and the expense of bringing in staff and visitors, the plan says.

To get to the “le parc national des Monts-Pyramides,” you will have to fly in by Twin Otter or float plane.

To participate, you must contact the department of sustainable development, environment and parks to let them know beforehand that you plan to present a brief, by calling 418-521-3907 or, by email, at pyramides@mddep.gouv.qc.ca.

Following the public hearings, there may be a second round of hearings to look at the Kativik Environmental Quality Commission’s impact studies of the proposed park.

Then, information gathered from these hearings will be presented to Quebec’s National Assembly, before cabinet decides to officially create the park — this process can take from six months to two years.

You can see a status report on the history of “le parc national des Monts-Pyramides” here.