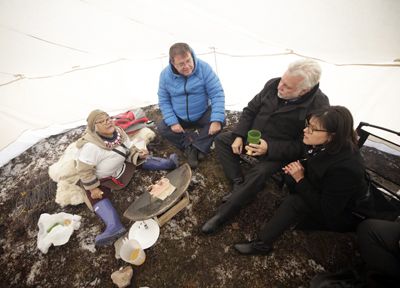 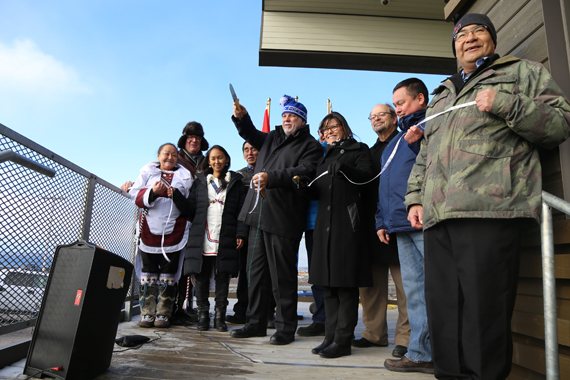 During the two-day visit, which took the premier to Kuujjuaq and Umiujaq Oct. 26 and Oct. 27, Couillard and some fellow cabinet ministers met with Nunavik leaders as part of Parnasimautilirijiit, a working group made up of regional organizations.

Couillard also met with teachers and students at Jaanimmarik high school in Kuujjuaq.

“It’s not unusual for Inuit leaders to meet Quebec’s premier in this day and age, but they’re usually held down south in Quebec City,” said Makivik President Jobie Tukkiapik.

“To have the premier in our homeland, meeting with our leadership is not something we take for granted. I’m pleased he took the time to travel to our territory to hear us out on issues important to our people.”

The premier’s delegation did not deliver any announcements during the two-day visit, but the Kativik Regional Government said its executives discussed the region’s infrastructure needs, Hydro-Québec’s residential rates in Nunavik and the pending renewal of its cost-of-living agreement with the province next spring.

Early Oct. 27, Couillard boarded a plane with Nunavik leaders and parks officials to visit Umiujaq for the inauguration of Tursujuq park.

Tursujuq, one of four established Quebec provincial parks in Nunavik, is the largest in all of the province, at 26,107 square kilometres.

The delegation also stopped for tea and bannock with Umiujaq residents in a canvas tent set up for the visit.

Couillard used the visit to boost his government’s Plan Nord, a blueprint for development in Quebec’s North.

While the plan focuses on job creation and wealth in the North, it also pledges to protect 20 per cent of its land mass from development.

“[This] inauguration clearly demonstrates the importance that our government places on the creation of these [parks] and, by the same token, the preservation of our biodiversity,” Couillard said in a government release.

Couillard’s trip to Kuujjuaq was initially delayed Oct. 26 as he received news of the Oct. 25 arrest of Liberal MNA and former Sûreté du Québec provincial police officer Guy Ouellette, who is alleged to have leaked information to journalists about police investigations conducted by Quebec’s anti-corruption unit, l’Unité permanente anti corruption, or UPAC.

Oullette’s arrest is allegedly linked to a UPAC probe looking into illegal financing within the Liberal party when it was led by former Quebec Premier Jean Charest.

The government said Ouellette would step away from the party pending the results of the investigation.