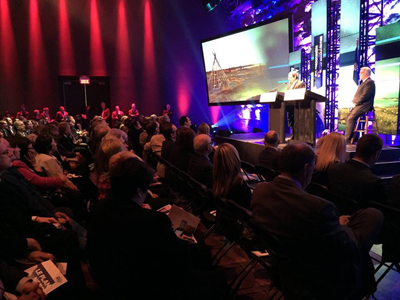 Quebec’s Plan Nord is hardly new, but the provincial government breathed new life into its northern blueprint April 8, launching a scaled down action plan for development above the 49th parallel.

That includes spending $2.7 billion over the next 20 years on the economic, social and cultural development of Quebec’s North, along with a repeated commitment to ensure that development is sustainable and in collaboration with the province’s indigenous groups.

With that in mind, Nunavik walked away with a small gift bag, including new social housing and money to set aside for new park and wilderness areas.

The region will get 70 new social housing units, Quebec announced April 8 in Montreal. Of these units, 10 are multi-generational units, or in-law suites designed to house elders, whose construction will get underway in 2016.

Those units are being paid for with money initially targeted at Nunavik’s home ownership program, announced as part of the original Plan Nord launched in 2011, which aimed to help subsidize 200 new private homes in the region.

That home ownership program has not caught on as hoped in Nunavik. But the April 8 announcement included subsidies for 20 privately built-and-owned homes that would fall under a “buy-back” program, meaning private owners are guaranteed the ability to sell their homes back to the province.

The government also announced it would help subsidize a pilot project for a private developer to build 18 rental units in Kuujjuaq, Nunavik’s largest community.

The province also committed April 8 to:

• set aside a section of the Kovik River and part of its watershed as a wilderness area, located north of the community of Akulivik, a popular travel corridor and harvesting area for Inuit;

• approve the creation of the region’s fourth provincial park, Ulittaniujalik, set at the base of Pyramid Mountain along the George River. The announcement is expected to come with millions in funding to build infrastructure at two of the park’s “gateways”: Kuujjuaq and Kwawachikamach; and,

• renovate and expand the Inukjuak airport, including its runway.

Quebec’s Plan Nord has been under almost constant evolution since its initial launch by Jean Charest’s Liberal government in 2011. It was rebranded by the Parti Québécois after this party took power in 2013, and then fell back into the hands of the Liberal government, re-elected in 2014.

But what Nunavik leaders took away from the plan’s latest re-launch was the government’s revised focus — this plan is less about the industrial development of the North, they said, and more about the social development in regions inhabited by the province’s Aboriginal groups.

“We’re a lot more optimistic about the plan than we were,” Jobie Tukkiapik, president of Makivik Corp., told Nunatsiaq News in an April 8 interview.

“We’re much more prepared to meet with government and industry this time around, but they also make a lot more reference to the First Nations and Inuit, in terms of consulting with them in order to move forward.”

In 2011, the Plan Nord’s focus appeared to be boosting the province’s northern mining industry, Tukkiapik said; today, it’s more about dialogue — and that works both ways.

“You can’t just turn around and say no to development — you have to find a balance and find a way to sustain our way of life,” Tukkiapik said.

Four years since its first launch, Quebec’s Aboriginal affairs minister, who was then, and is again now, Geoff Kelley, says Plan Nord has grown to become a much more inclusive process.

“It’s much deeper than a mining plan,” he said. “We’ve had clear instructions to develop the social and cultural aspect of things.”

As part of that, Kelley plans to invite Nunavik leaders to Quebec City in the coming months to present their Parnasimautik report to provincial ministers. The report is the result of regional consultations across Nunavik throughout 2013, in order to develop a regional blueprint or “Plan Nunavik.”

Kativik Regional Government chair Maggie Emudluk noted that there weren’t any major announcements for Nunavik in this re-launched version of Plan Nord, but she said that ongoing dialogue with the province is of the biggest benefits to Nunavimmiut.

“They want to make sure that [First Nations and Inuit] are included in the discussions, and that their treaties are respected,” Emudluk said. “I think that’s good. Now let’s just see if this is going to evolve into reality.”