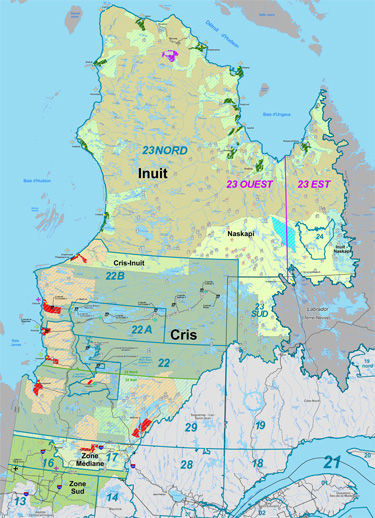 This map from Quebec’s department of natural resources and wildlife shows the caribou hunting zones in Nunavik and Northern Quebec. The province announced new regulations for Nunavik’s sport hunt Dec. 21, which will limit the 2012-13 season hunt of the Leaf River and George River herds. (IMAGE COURTESY OF MRNF)

These will limit sports hunting of the Leaf River and George River herds for the 2012-2013 season.

“The data collected in 2011 shows that the Leaf River herd is following the same path as the decreasing population of the George River herd, which encourages us to strengthen the hunting rules to preserve the species,” said Serge Simard, Quebec’s minister of natural resources and wildlife, in a Dec. 21 news release.

The hunt of the Leaf River here, whose numbers are down, according to the latest population survey, will follow the same regulations now in place, which limits hunters to a maximum catch of two caribou each per year.

Earlier this year, Quebec’s natural resources department announced cuts to the caribou sports hunt, which takes some of the 40,000 caribou hunted every year from the Leaf and George River herds.

Quebec announced a 25 per cent cut to the number of permits handed out for the Leaf Bay herd in Nunavik, along with a shortened hunt in certain zones.

Only 500 licenses will be issues in zone 22A and the allocation of permits will be by lottery. There is no requirement to use an outfitter in this zone, the news release said.

The move responds to recent surveys by biologists who say they’ve seen a dramatic decline in the numbers and overall health of Nunavik’s caribou.

Some biologists estimate there could be fewer than 300,000 caribou left in the region — that from a herd once estimated to be one-million animals strong.

That’s despite reports from Nunavik’s outfitters that caribou numbers looked better than ever this year.

The $20-million caribou outfitting business has been a mainstay of Nunavik’s economy for more than 20 years, pouring money into local stores and airlines from August to October.

In a good year, about 3,000 to 5,000 hunters would come mainly from the United States to Nunavik for one-week hunting packages and a chance to bag two caribou.

The new regulations won’t impact the Inuit caribou harvest in Nunavik, but the province says their plan encourages Inuit to monitor and manage future caribou hunts.

Inuit hunters already provide some harvest data to the province, but the department of natural resources and wildlife hopes to implement measures to make that data gathering more efficient, a department spokesperson said.