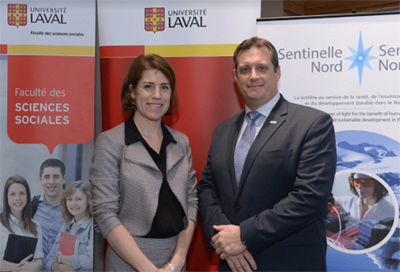 Laval university has launched a new research chair position that focuses on Inuit society and how it interacts with non-Inuit.

Caroline Hervé was named to the new Laval-based Research Chair on Relations with Inuit Societies last week, a five-year position that aims to get to the historical, political and cultural roots of the cultural misunderstandings between North and South.

Hervé is an assistant professor in Laval’s department of anthropology and a former resident of Inukjuak and Puvirnituq, where she did her research for many years and served as executive director to the Satuviit Inuit Women’s Association.

“This chair is born of different experiences in my life,” Hervé said.

“At Saturviit, I became aware of a lack of confidence among Inuit in their own knowledge and identity,” she said.

Without that confidence of having an elected role in Nunavik’s major organizations, Hervé said she noted how difficult it can be for Inuit to get involved in shaping regional programs and their own futures—much of which is currently decided outside of the region.

A big part of her new research role will be looking at how to build bridges between Inuit and non-Inuit in the North, Hervé said.

Hervé will also work alongside Nunavik’s regional organizations to develop training and educational tools for non-Inuit who come to the region to provide them with a better cultural and historical background on the communities they work in.

Laval university is well-equipped to deliver that training online or in a distance format, she added.

Hervé’s research will be largely Nunavik-focused to start, but she hopes to eventually expand into other Inuit regions.

The new chair position is a five-year initiative funded through Sentinelle Nord, a Laval-based agency that issues grants for northern-focused research, which was itself created through a $98-million federal grant from the Canada First Research Excellence Fund.