Hearings are NIRB’s final chance to assess gold mine proposal 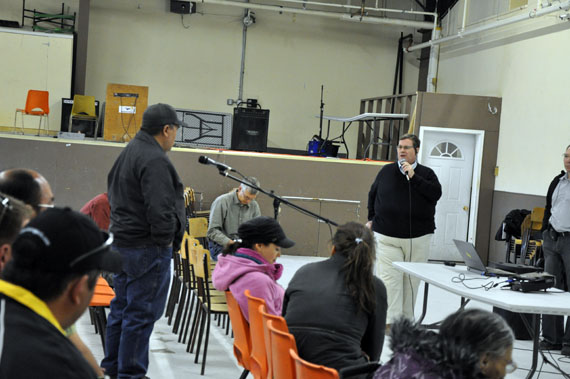 A resident of Rankin Inlet asks a question at community consultation hosted in the community this past June on Agnico Eagle Mines’ proposed Meliadine gold mine. Final hearings on the project will be held in Rankin Inlet Aug. 21-27. (PHOTO BY SARAH ROGERS)

Final hearings on Agnico Eagle Mines’ Meliadine project begin Aug. 21, in Rankin Inlet — the final chance for the Nunavut Impact Review Board to assess the Meliadine gold mine proposal.

If given the go-ahead, the mine, linked to Rankin Inlet by a 24-kilometre all-weather road, would be AEM’s second gold operation in the territory.

AEM already runs Nunavut’s only operating mine — the Meadowbank gold mine, located about 80 kilometres north of Baker Lake.

But before it can get a project certificate and other licences and permits for Meliadine, the company must wait for a number of submissions from territorial and federal government departments and Inuit organizations.

The hearing’s registered intervenors include the federal departments of Aboriginal Affairs and Northern Development, Natural Resources, Transport, and Environment, along with Inuit intervenors like the Kivalliq Inuit Association, the Kivalliq Wildlife Board, and hunters and trappers organizations from Rankin Inlet and Chesterfield Inlet.

Those groups will respond to the 11,000-page final environmental impact statement that AEM released last May, outlining the potential impact of gold production on the vegetation, air quality, sea and land animals and nearby communities.

The first two days of the hearing — Aug. 21 and Aug. 22 — will hear technical presentations from those groups.

On Aug. 23, AEM will host on-site visits to the Meliadine site, with bus tours leaving Rankin Inlet throughout the day.

And back in Rankin Inlet Aug. 25, AEM will make presentations on specific aspects of the project, like its all-weather road, different mining sites and Rankin Inlet facilities and marine shipping.

AEM has said its Meliadine mine could produce 400,000 ounces of gold per year over its 13-year lifespan, which hopes to run from about 2018 to 2030, and possibly longer.

Once in operation, Meliadine will employ about 700 people. AEM said it invested in 13,000 hours of training for Inuit beneficiaries last year, with hopes that many of those workers will come from local communities.

Company officials expect a response from the NIRB by the end of 2014, and then NIRB’s recommendation would go to the federal government for final approval.

From there, Meliadine could receive its project certificate by early 2015, although the company’s board has yet to make a final decision on construction.