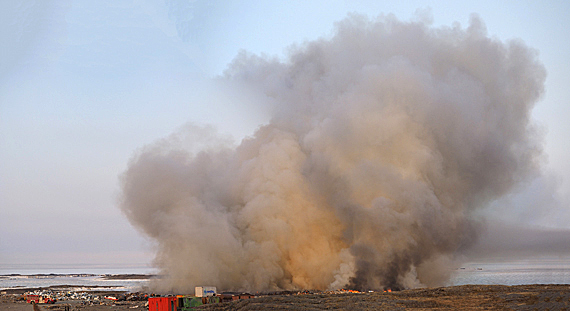 Rankin Inlet’s fire department extinguished a minor fire at the hamlet’s dump Aug. 11. The flare-up was the fourth time flames have broken out at the site since the dump’s last major fire, pictured, which brought thick smoke into the community earlier this summer. (FILE PHOTO)

Rankin Inlet’s dump flared up again Aug. 11, marking the fourth time flames have erupted in the landfill since July 4, when the hamlet extinguished a series of blazes spread out over half of its surface.

Unlike the earlier 10-day fire, June 24 to July 4, the most recent flare-up was limited to an area about 15-by-15 metres, said Justin Merritt, the acting senior administrative officer for the hamlet.

“We’ve been monitoring it for the last month,” Merritt said.

Hamlet workers noticed smoke and flames at about 8:30 a.m. Aug. 11 in an area of the dump containing more recent garbage, well away from the areas affected by the 10-day fire, he said.

The fire department quickly responded to the blaze and put it out by 11:30.

“They’re just watching it right now, putting out the hot spots,” Merritt said early in the afternoon of Aug. 11.

The fire’s cause is unknown, the SAO said, although officials believe it started spontaneously from high temperatures caused by decomposing matter.

Despite the incident, Merritt said the hamlet is continuing to install a gate around the facility, as planned, which should be completed within a week’s time.

The gate comes with a plan to sort garbage, which the hamlet drafted in response to the 10-day fire.

The fire department and public works extinguished the earlier blaze — described as a “series of small fires” — by smothering the affected area with 259 loads of sand and gravel.

“Once we get the gate up, we’ll put signs up by the end of the month for controlled access, to tell people where to put certain articles,” Merritt told Nunatsiaq News.

Rankin Inlet’s landfill covers an area greater than three football fields in size, according to Merritt, and has taken on all of the community’s waste since the mid-1980s.