“People from all walks of life come through here” 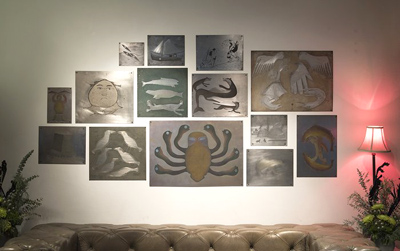 A lounge area in the Drake Hotel features a display of metal etching plates used to print some of Kinngait Studios most iconic images. (PHOTO BY SARAH ROGERS) 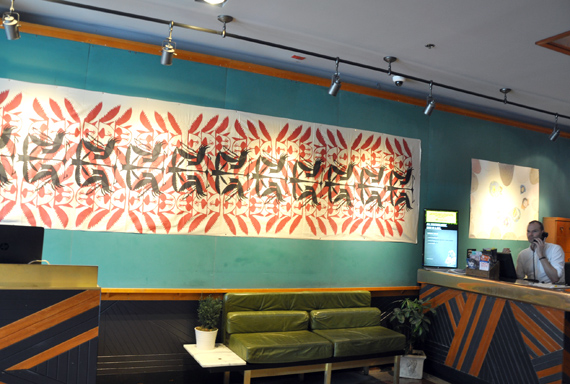 Visitors to the Drake Hotel in Toronto are greeted by this massive screen print, first produced in Cape Dorset in the 1960s. (PHOTO BY SARAH ROGERS) 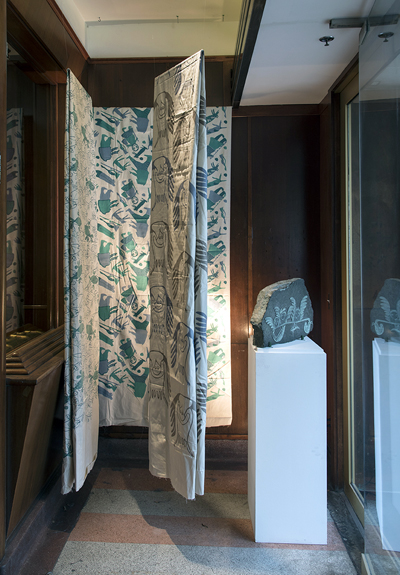 Textiles hang on display in the Drake’s front entrance, along with a stoneblock called Spectator Birds, made by Lucy Qinnuayuak in 1970. (PHOTO BY CHERYL RONDEAU)

TORONTO—When art curator Mia Nielsen visited Dorset Fine Arts’ Toronto office for the first time, she describes being “blown away” by what she saw.

“It was very urgent and real and a window into a culture I hadn’t seen before,” Nielsen said of the pieces she saw, all produced at the West Baffin Eskimo Co-operative’s Kinngait Studio in Cape Dorset.

Nielsen, long-time curator at the city’s uber-hip Drake Hotel, said it was her first time immersing herself in Inuit art.

But it wasn’t the bold, wildlife-inspired annual print collections that grabbed her most—arguably Kinngait Studio’s best-known work—nor the impressive carvings.

Sitting in a box on the office floor, Nielsen discovered yards and yards of cotton fabric with colourful images of birds and other Inuit imagery, hand screen printed at the Cape Dorset studio in the 1960s.

Dorset Fine Arts figures only a few were ever made available for sale. The rest have sat in storage for decades; so long that their original artists are largely unknown.

Some of those pieces have now found a temporary home on the walls of the trendy establishment along Toronto’s Queen St. W.. The pieces are massive, some running 20-feet across, hung in the front entrance of the boutique hotel, which also houses a restaurant, café and performance space.

This is the Drake’s first dedicated installation of Inuit art—of Indigenous art, in fact— inspired by Canada’s 150th anniversary this year.

“From a creative standpoint, we wanted to start from a place that wasn’t confederation,” Nielsen said. “People from all walks of life come through here and it’s showing them something they may not have seen.”

The exhibit is called Maanngat, “from here” in Inuktitut. The exhibition also includes metal etching plates and a stonecut matrix used to print some of Kinngait Studio’s most iconic images, alongside more contemporary drawings by Cape Dorset artist Shuvanai Ashoona.

For Toronto fans of Inuit art, the Drake is hosting a symposium on Jan. 29 at 3 p.m. and again at 4:30 p.m. The event will feature a discussion on the current issues facing Inuit art, lead by Nielsen, Dorset Fine Arts’ William Huffman and Cape Dorset artist Saimaiyu Akesuk, who’ll participate by video conference.

The talk will be followed by a northern-inspired, prix fixe menu, which includes smoked Arctic char with mustard greens, confit potatoes, poached fennel and radish along with a bison ragout.

Maanngat runs at the Drake until Feb. 8. You can read more about the pieces on display here.

Following the exhibit, Dorset Fine Arts has an agreement with the Textile Museum of Canada in Toronto to host the large textile pieces.