Sgt. Yvonne Niego will stay on as community policing coordinator 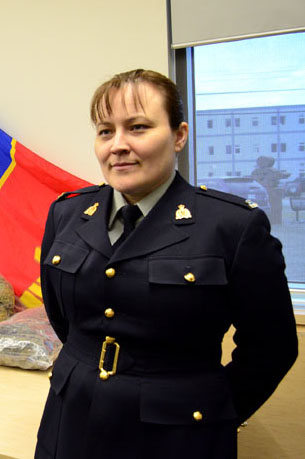 Iqaluit-based RCMP corporal Yvonne Niego has been promoted to the rank of sergeant, the Nunavut RCMP announced Dec. 17.

Since RCMP Sgt. Jimmy Akavak’s retirement in 2012, Niego has been working as coordinator of community policing initiatives and handling media relations for the Nunavut RCMP.

She’ll continue in that role now as a sergeant.

“I am particularly pleased to have Sgt. Niego continue on in this capacity,” said chief superintendent Lindsey Brine, commanding officer of V Division RCMP, in a press release.

“[Niego] has told me that living and growing up in Nunavut gives her a more in-depth knowledge of the history and background to issues, which keeps her motivated and able to function well in her role as community policing and media coordinator for the territory.”

Niego began with the RCMP in the early 1990s, working as a constable in Baker Lake.

She was transferred to Ottawa in 2005 to work with the RCMP’s National Aboriginal Policing Service.

In 2008, Niego became a corporal and the first Inuk woman to be promoted within the RCMP.

Niego has since relocated to Iqaluit, where she promotes the force’s work at the community level, including abuse prevention, firearms safety and orientation for officers new to the North.

“I am certain that this is just a start and that many more Nunavummiut will follow, advancing themselves along their chosen career paths,” Brine said of Niego’s promotion.

“It takes a good work ethic and maintaining your core values or what we call in Nunavut, Inuit Qaujimajatunqangit, the guiding principles.”