Inuit Sign Language should be recognized as a right, expert says 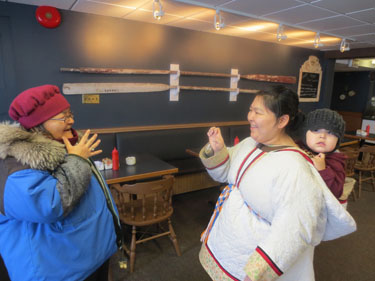 When Dr. Jamie MacDougall, a deafness researcher working on the Inuit Sign Language in Nunavut, gestures towards his chest in a patting motion, deaf Inuit often ask him, “Why are you afraid all the time?”

That’s because MacDougall was using the sign for “Are you okay?” in American Sign Language, but, in Inuit Sign Language, he was saying he was afraid.

In each of the two sign languages, deaf people use hand gestures that stand for sounds, words and concepts.

But they don’t necessarily use the same gestures, said MacDougall, who learned ASL as a young child from his deaf parents.

Although everyone laughs about the differences between the two sign languages, “over the years I’ve come to understand, but you have to be careful,” he said.

MacDougall facilitated a week-long workshop for deaf Inuit last week in Rankin Inlet to help them and their families “support the promotion and revitalization” of ISL.

The workshop participants reviewed materials, such as flashcards, booklets and now ebooks that have been developed over the years to teach ISL, a project that MacDougall has been involved in for a number of years.

There is no stigma attached to deafness, said MacDougall, who is the current president and chief executive officer of the Canadian Deafness Research and Training Institute.

“[But] we wanted to point to the need for interpretation,” MacDougall said.

Another big difference between ASL, widely used in the South, and ISL: its more informal model that helps make it more relevant to Inuit culture.

Take the sign for woman. In ASL, it’s a pulling gesture alongside the face, referring to a type of bonnet that women used to wear long ago.

In ISL, the sign for woman refers to her curves or figure.

With new technology such as iPads and social media with video capabilities, more visual communication is available now, and that can help people to understand ISL, said MacDougall, who hopes to connect communities through booklets, posters and online resources.

But when it comes to numbers, MacDougall doesn’t know how many deaf people there are in Nunavut, or how many of them use ISL or ASL.

However, there is a lot of middle-ear deafness in Nunavut.

“The catch is that up here, the ratio is higher because of outbreaks of meningitis [and other diseases],” MacDougall said.

“We know it’s higher but we don’t know what it is,” he said.

“A lot of deaf people in Nunavut do use ASL — we’re not in any way trying to extinguish that,” he said.

MacDougall will speculate that Inuit, deaf or not, have always had some form of sign language.

“If you’re nomadic, and hunting, you have a sign language,” he said.

The purpose of the Rankin workshop, besides reviewing the ISL materials, is to create general awareness about ISL.

The 10 or so participants in Rankin, who were also from that, said they enjoyed the workshop, MacDougall said.

“No one wanted to leave,” he said.

MacDougall said that following his research and work in the communities, ISL is now recognized and it’s protected under Section 15 of the Charter of Rights.

That means deaf Nunavummiut who use ISL have the right to an interpreter in court.

When Baker Lake’s Bobby Suwarak, who was deaf and mute, went to court on sexual assault charges in 2004, MacDougall was asked to design a translation system that Suwarak could use to communicate with the court.

MacDougall was not involved in Suwarak’s later court appearances in 2010.

But if a similar legal situation in Nunavut arose, involving a person who is deaf and mute and uses ISL, “I would say we’re in trouble, even though I did develop a system,” MacDougall said.

It’s up to the government to find the political will to implement it, he said.

His system for court, which involves using an interpreter who knows both ISL and ASL, should be put in place, he said.

And whether someone goes to court or walks into a hospital, they should have access to ISL interpretation if needed.

“We are at a crossroads, we need a curriculum, [the ISL training] should be taught at Nunavut Arctic College,” MacDougall said.

For him, government departments, including health, education, and justice, should be involved with carrying out the ISL training.

“I think the health system needs to step up to the plate,” MacDougall said.

The next step is to hold a summit in Iqaluit on deafness and ISL, and to take the recommendations that came out of the Rankin workshop and put them into action.

Those recommendations include more ISL awareness and training.

“We need to continue to re-develop the materials,” MacDougall said.

And the internet “with better bandwidth, is part of the answer.”

MacDougall, who was recently honoured with the Order of Canada and a Queen’s Diamond Jubilee medal, said it’s a privilege to work in Nunavut.