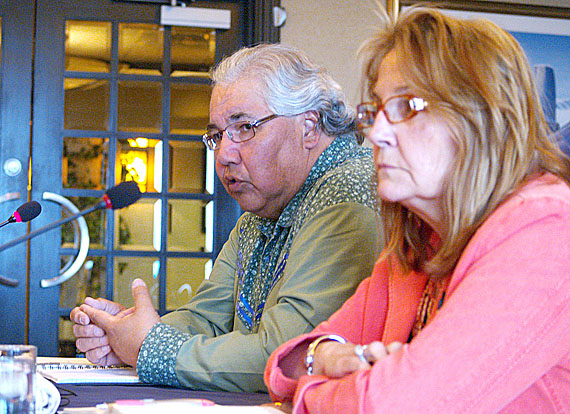 Funding for education, healing and cultural-revival programs were among the major recommendations laid out in an interim report officially released Feb. 24 by the commission established to explore the legacy of Canada’s residential school system.

The Truth and Reconciliation Commission’s report lists 20 recommendations — the result of the commissioners’ Canada-wide tour to hear the stories of former students of residential schools.

Among the recommendations, the report said the federal, provincial and territorial governments should take measures to support healing by establishing — and ensuring there are resources for — health and wellness centres specializing in childhood trauma, long-term grief and culturally appropriate treatment.

The commission also included some budget recommendations for the federal government.

It recommends Canada and churches establish a revival fund to finance projects that promote the sharing and relearning of traditional knowledge lost in residential schools.

In addition, it recommended the government restore funding to the Aboriginal Healing Foundation, a national nonprofit organization that provides aboriginal-directed healing initiatives to address the legacy of the residential school system. The federal government provided a one-time grant of $350 million in 1998, but discontinued funding in 2010.

“The closing of the Aboriginal Health Foundation will make Canada’s reconciliation journey even more challenging in the years to come,” the report says.

Reconciliation, the report emphasizes, requires that the damaged relationship between aboriginal and non-aboriginal Canadians be repaired.

“Canadians have generally been led to believe — by what has been taught and not taught in schools — Aboriginal People were and are uncivilized, primitive, and inferior, and continue to need to be civilized,” the report states.

At a news conference Friday, Commissioner Marie Wilson said all Canadians lose from ignorance about what happened in residential schools.

“We have all been the losers for lack of that knowledge and understanding,” she said. “It has led us to a place of stereotypes and judgment and an inability to connect the dots between the realities of our country today and the 130-year history of contributing factors that led to it.”

To improve the relationship between aboriginal and non-aboriginal Canadians, the report says public awareness and understanding of the history of residential schools must be improved. The document recommends provinces and territories create age-appropriate curricula about residential schools for public schools and that the government provide all high schools with a copy of the 2009 Statement of Apology for public display.

The commission found the breakdown of family relationships was one of the greatest impacts of the residential schools.

“We lost our childhood, we lost our families, the joy of our spirits and our innocence,” Northwest Territories Deputy Premier Jackson Lafferty said Friday.

The residential school system has left a mark not only on those who were forced to attend the institutions, but also on the children and grandchildren of those people, the report says. Removed from their families, aboriginal children who grew up in the schools did not learn how to parent and passed their suffering down to their children.

Elise Charland, who went to Onion Lake residential school in Saskatchewan, called herself a terrible parent in the report They Came for the Children, published by the commission.

“My children were growing up with my abusive behaviour of slapping, whipping and screaming at them for everything they did. I loved them in a very sick way.”

To help this, the report recommends that all levels of government develop culturally appropriate early-childhood and parenting programs.

The commission was created as part of the 2007 Indian Residential Schools Settlement Agreement, in which the federal government gave former students in the system $5.1 billion to partially compensate them for their suffering. It came ahead of the federal government’s historic 2008 apology to First Nations, Inuit and Metis peoples, in which Prime Minister Stephen Harper apologized, on behalf of all Canadians, for trying to “kill the Indian” in their children.

More than 150,000 First Nations, Inuit, and Metis children were placed in residential schools between the 1840s and 1996 when the last school was closed. The government-funded, church-run boarding schools aimed to assimilate aboriginal people by removing them from their communities and forbidding them to speak their languages and engage in cultural practices. There are about 80,000 former students still alive.

For reconciliation to be achieved, the report says, the relationship must be improved between aboriginal people and the government of Canada, which has historically viewed aboriginal people as “wards of the state” and failed to “recognize the unique legal status of Aboriginal Peoples as the original peoples of this country.”

“Without that recognition, we run the risk of continuing the assimilationist policies and the social harms that were integral to the residential schools.”

The commission is halfway through its five-year mandate, which will end in 2014 with the release of a full report.