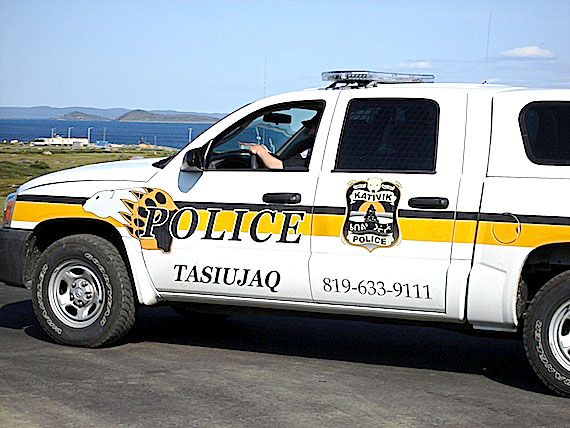 The KRPF faces a lawsuit related to a 2011 incident when a young woman was raped in the back of a police car by another prisoner. (FILE PHOTO)

Lawyers representing the Kativik Regional Police Force and its insurers have said the force is not at fault for a 2011 incident in which a young Nunavik woman was raped in the back of a police car.

That’s in response to a lawsuit the young woman filed in 2014 against the KPRF — and its parent organization, the Kativik Regional Government — for gross negligence.

On Sept. 19, 2011, the woman, then 17, was visiting friends in Tasiujaq, on Nunavik’s Ungava Bay coast, when she became intoxicated and was picked up by a member of the KRPF — the only police officer on duty in the community that night.

The female officer handcuffed the girl and put her in the back of the police cruiser next to a man the police officer had picked up in an unrelated incident, during a disturbance.

When the officer left the two detainees in the back of the pick-up to gather information on her latest arrest, the male prisoner, Joe Kritik, who was not handcuffed, pulled down the young woman’s pants and sexually assaulted her.

Kritik later pleaded guilty to sexual assault and was sentenced to 39 months in prison.

“Most important, there was a paragraph that said, according to them, they were not at fault,” Stuart said. “I’m a little bit surprised.

“I know that police officers [in Nunavik] do a very dangerous and tough job, but I don’t see how they can claim no fault.”

The defence also sends a bad message to Nunavimmiut, Stuart said: that police take no responsibility for a teenager who was raped while in their custody.

According to reports, the KRPF officer working that September 2011 evening was new to policing, new to the community and wasn’t yet authorized to carry a firearm.

Stuart summarized some points from the defence’s case to Nunatsiaq News:

• the officer hadn’t, in fact, arrested Kritik that evening, but only put him in the back of the police vehicle while she determined if there were grounds to arrest him;

• before she could do that, she was called to respond to another incident;

• the plaintiff was intoxicated and out of control when police went to pick her up;

• the officer remained close by and was able to monitor her vehicle when the rape happened.

The officer was suspended following the incident and resigned from the KRPF soon afterward.

An internal KRPF investigation later cleared her of any criminal wrongdoing.

The lawsuit accuses the KRPF, by way of the KRG, of showing “a serious lack of professionalism and gross negligence by leaving an unexperienced police officer, with no knowledge of life experience of Northern Quebec populations, and without the authorization to carry a firearm, to ensure alone the security of the public.”

The plaintiff waited the maximum time period of three years before filing the lawsuit last August 2014, claiming $400,000 in damages.

A psychological assessment done last year confirmed the victim, now 21, suffers from post-traumatic stress disorder and as a results, struggles with alcohol addiction and suicidal thoughts.

A lawyer for the KRPF and KRG interviewed the plaintiff this past spring in Montreal.

Stuart said the two sides had tried to negotiate a settlement but that their numbers are just “too far apart.”