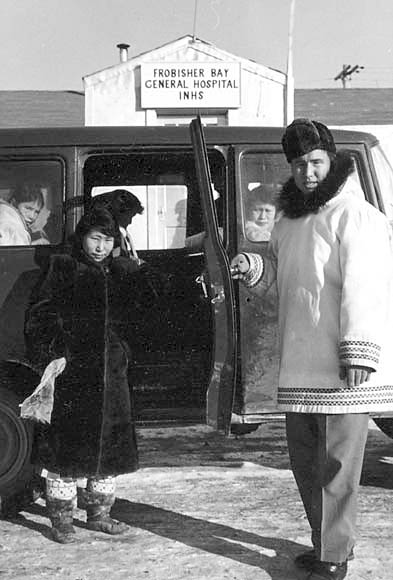 The late Joe Tikivik in front of an early hospital building in Frobisher Bay. The photo is undated, but likely from the late 1950s or early 1960s. (LIBRARY AND ARCHIVES CANADA, MIKAN NO. 3613836)

Tikivik, sometimes known as Joe, has passed on.

Born near Cape Dorset in the 1930s, he witnessed changes to his world that no one could ever have anticipated.

As a young boy, Tikivik learned many skills from his capable father, skills that he was able to put to good use many years later. His father made sure that his son could cope with change.

The family moved to Iqaluit by dog team in the early 1950s.

One of his first jobs as a young boy was washing dishes at the U.S military base. He and Simonie Michael worked as a team, a friendship that would last them all their lives.

Tikivik told me that as little kids, the head cook provided them both with a box to stand on so they could reach the sink.

Tikivik eventually spent many years working as an assistant at the Apex nursing station, acting as an interpreter and handyman.

As a community leader, it wasn’t long before he began to take interest in politics.

Tikivik and his pal Simonie, together with Abe Okpik, formed their own company, which became Inuk Ltd. It was involved in janitorial contracts, cleaning government buildings, including the hospital, and many other offices.

Later they took on some construction projects. At one time, there were as many as 50 employees, all Inuit.

Tikivik and Simonie together created the Toonik character that became the symbol for the long-running Toonik tyme festival.

With his skills, Tikivik acted as the head of the land program at the Gordon Robertson Education Centre (now Inuksuk High School) for a number of years. He headed the local Ranger program for more than 35 years. He also acted as a guide for Her Majesty the Queen during the royal visit of 1970.

Tikivik served as a member of the municipal council before becoming mayor of Iqaluit during the early 1970s.