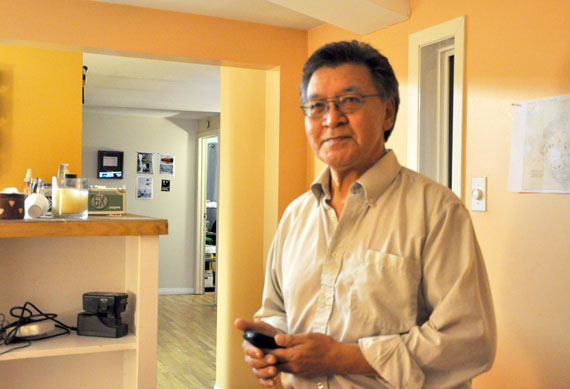 Tom Sammurtok, the MLA for Rankin Inlet North-Chesterfield Inlet, said he wants to quit drinking for good. “I really want to completely stop drinking alcohol because there was a period in my life when I didn’t drink and I was fine. Actually, life was a lot better then, and my health was a lot better then.” (FILE PHOTO)

When RCMP arrested MLA Tom Sammurtok for impaired driving in Iqaluit April 13, his blood-alcohol level was measured at nearly two and half times above the legal limit.

Sammurtok, the member for Rankin Inlet North-Chesterfield Inlet, appeared before a Justice of the Peace in an Iqaluit courtroom June 4 to plead guilty to driving under the influence of alcohol on the night of April 13.

In accepting Sammurtok’s guilty plea, Justice of the Peace Nicole Sikma ordered that Sammurtok pay $1,500, plus a mandatory victims’ surcharge of $450, and revoked his driver’s license for one year.

“I wanted to plead guilty because I take full responsibility for what I did,” Sammurtok told Sikma.

“And I’m taking steps to make sure I don’t find myself in this situation again.”

Sammurtok had been drinking at the Frobisher Inn in Iqaluit on the night of April 13 with delegates attending the Nunavut Mining Symposium, the court heard June 4.

When police pulled up behind his car, Sammurtok attempted to reverse a number of times, bumping into the RCMP truck and causing a small dent.

Police described Sammurtok as staggering, slurring his speech and smelling of alcohol, the court heard.

Once at the local detachment, a breath-test revealed Sammurtok’s blood-alcohol level was 190 milligrams of alcohol per 100 millilitres of blood.

The legal limit for operating a car is 80 milligrams of alcohol per 100 millilitres of blood.

Crown prosecutor Benjamin Flight said in court that the high alcohol reading is an aggravating factor, and Sikma agreed.

Outside the courtroom, Sammurtok said he’s glad the ordeal is over.

“I feel relieved that it’s over now, that it’s done. Now I can just plan on carrying on with my life, as it were,” a remorseful Sammurtok told Nunatsiaq News.

Sammurtok, who was stripped of his cabinet portfolio by Premier Peter Taptuna after being charged April 13, said he will continue to receive the counselling he began immediately after his arrest.

And Sammurtok said he plans on reaching out to his community by traveling with his counsellor to Rankin Inlet schools and the correctional centre to help educate Nunavummiut about the dangers of irresponsible alcohol use.

“Now that I’m a regular MLA, I’ll be in Rankin a lot more often,” Sammurtok said.

And what message about alcohol will he bring to Rankin Inlet youth and offenders?

“If at all possible, don’t drink at all. And if you are going to drink, then obviously don’t drink and drive,” Sammurtok said.

“I know a lot of young people think, ‘If I quit drinking, life’s going to be so boring.’ Actually, no, there’s another life out there that’s not boring, even without alcohol.”

Sammurtok said he has a history of struggling with alcohol, but said he was completely sober for a five-to-six-year period a few years back.

And that’s where he’d like to get to again, with the help of his counsellor, Sammurtok said.