“It’s necessary… and we’re going to grow from this” 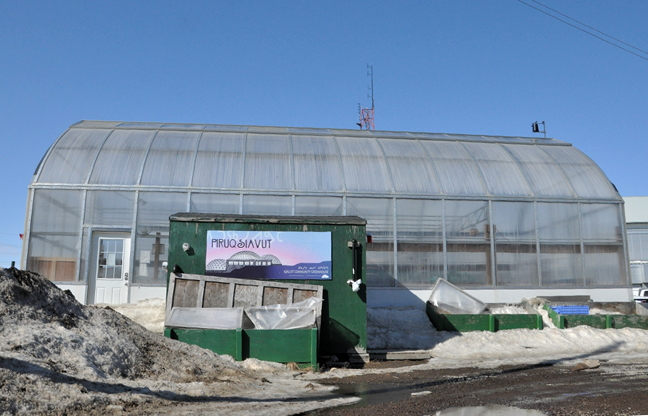 The Iqaluit Greenhouse Society’s aging greenhouse, located behind the Nunavut Research Centre, will undergo significant renovations this year and as a result, will be unable to grow any produce this season. (PHOTO BY THOMAS ROHNER)

For the Iqaluit Greenhouse Society, 2015 was a big year — and not just because of high-profile visits by local and international elected officials and media outlets such as the Weather Network.

Besides proving the viability of growing strawberries and continuing talks with the City of Iqaluit on a composting program, the society increased its community engagement efforts in 2015 and provided tours to students of three Iqaluit schools, Leyden said.

“Nothing makes me prouder then when we reach out and touch youths… you can see it in their faces,” Leyden told about 20 people in Nunavut Research Institute’s boardroom.

The Iqaluit greenhouse won’t grow any food in 2016, but that’s because the society plans to make some ambitious renovations to their aging greenhouse, which sits behind the Nunavut Research Institute.

Those renovations include overhauling the heating system with new unit heaters, an energy-saving curtain system and a soapstone bed to trap heat, Leyden said.

“It wasn’t an easy decision, not to grow this year. But it’s necessary… and we’re going to grow from this,” Leyden said.

The society conducted a feasibility study and business plan in 2015 which Leyden said provides a blueprint for short and long-term goals.

The short-term goals, according to a summary of the business plan handed out at the meeting, include:

• extending the growing season from four to six months;

• increasing community partnerships and collaborations; and,

• increasing the level of food production over the next four years to around 1,000 kilograms per year.

In 2015, a growing season hampered by cold weather, the society produced around 50 kg of produce, compared to about 80 kg the previous year, Leyden said.

But the feasibility study, done by Agriteam Canada, suggested that upgrades to the existing greenhouse could yield 1,000 to 1,200 kg of food per year, Leyden said.

The society’s long-term plans, according to Leyden, are even more ambitious: to build a brand new facility on a lot currently under negotiation with the municipality that will house an improved greenhouse as well as space for a kitchen, food storage, country food preparation and offices for other community organizations.

And the society envisions a membership centred around a paid composting program, which Leyden said is in high-demand in Iqaluit.

“You drop off a bucket of rotting tomatoes for a bucket of fresh tomatoes, for example,” the president said.

“Our main goal is to make a difference in food security and sovereignty in Iqaluit.”

That means not only producing food, but more importantly championing food production by Iqaluit residents, he said.

The new 1,200-square-foot facility would be capable of producing 3,500 kg of food per year, according to the society’s business plan.

Most of the funding required for renovations in 2016 has been secured from the Annenberg Foundation out of California, the society’s treasurer Suzanne Parm-Etheridge told Nunatsiaq News.

And by proving the greenhouse’s viability and by building more partnerships within the community, Parm-Etheridge said at the April 30 meeting the society hopes to attract more funders.

This year, membership to the society — which was conceived of in 2001 and formed in 2006 — will be on a donation basis, she said.

Even though no food will be grown this year, the society still needs volunteers to help with the renovations and fundraising efforts, the treasurer said.

For example, the society hosts a monthly trivia night at the Storehouse Bar — the next scheduled trivia night is May 10 — and the society is looking for volunteers to help run that, Parm-Etheridge said.

“Really, this is the year to join because it’s a sort of rebirth,” she said.